Big Brother is no longer Big Brother in China. It’s Giant Brother these days.  China and Big Data. Something that’s developing rapidly. Artificial intelligence is all around us. China has developed an extremely sophisticated software system, which makes use of face and voice recognition. It’s used by many of the 180 million cameras that are hanging up in China – a number that will be increased by another 400 million over the next three years. The face recognition technology will help find criminals, drugs users, debtors, etc.

The technique is also integrated in special glasses, which allow law enforcement officials to get all the personal details of the person they’re looking at, within seconds. If you walk through a red light at a crossing, your picture will immediately pop up on some mega billboard. And if you do it more than five times, you’ll be considered antisocial.

So what, you might think. But don’t forget that those data are linked to virtually everything. Walk through a red light five times, and you’ll no longer be able to get a mortgage, take out any insurance, be admitted into a hospital or open a bank account. You can probably imagine what would happen, if you walked through a red light ten times. Literally everything is connected. If you call someone who happens to have some debts, you won’t get a dial tone, but hear this person’s debts listed instead.

The government claims it’s doing all these things because of terrorism. More precisely, to prevent terrorism. The system is based on algorithms, which determine whether your behaviour is strange or not. If your behaviour is considered strange, you’ll be arrested and put in jail provisionally, or sent to a ‘political education centre’.

China says they’re committed to an honest and creditworthy society. The idea is that when you’re being watched, you’ll automatically behave better. Everyone is awarded points for their behaviour, but what the point system is based on, only the Chinese gods know. It is and will be used though, to observe, assess and if needed, correct and punish people.

All in all, from now on, privacy is something of the past here. It no longer exists. Compared to this, leaking Facebook details seems child’s play and going to the sauna out of the question altogether. Who knows what kind of recognition software they’ve got in place there…

I’m writing this column offline. And when I’m done, I’m going to send it via a VPN. That way, nobody will be able to trace me based on my IP address. Perhaps the editors should also add some sunglasses and a moustache to my picture. To divert the face recognition software… 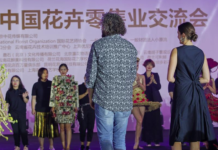 Nederlandse vruchtbomen made in China

China in the grip of pig disease