‘I had a farm in Africa’… one of the most famous sayings in film history spoken by a woman Meryl Streep and one of my favourite films (not in least of course because of Robert Redford), so when I had the opportunity to visit Africa, I wanted to see for myself how women fair. I was interested to discover if the coverage in the media which often criticizes the way the workers and in particularly the women are treated is correct.

With our group of Dutch Pelargonium Toscana growers we visited Florensis, which recently won the Plantum CSR award. Our first impression was that the workers who are mainly women bend to take the cuttings so we immediately questioned if they would not be better working on benches. Women in Kenya we heard, prefer to bend at the hips as this suits their build much better. In fact if they are transferred to the greenhouses where the mother plants are on raised benches they complain about back ache. 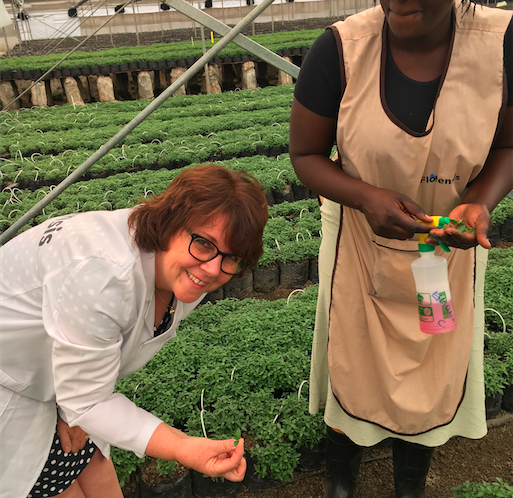 Staff work according to Kenyan legislation. They have a 48-hour week spread over 6 days, are paid overtime and piecework and are entitled to 3 months maternity leave. On returning to work they may then take an hour off each day to breast feed their babies. The company meanwhile runs a creche and nursery school where all mothers can send their children for a nominal fee.

The school provides education and nutritional meals and we were welcomed there by smiling faces and heart-melting singing. I was also encouraged to see female supervisors having been promoted or hired from university or college. You do have to get used to all the coloured overalls which denote ‘rank’. Blue for supervisors, brown for workers etc. Not quite the flat organisation we are used to in The Netherlands.

The company runs a clinic which offers birth control. Women are having less children as workers can now build up pensions which means that they no longer have to raise large families as safeguards for old age. Another plus for women is that AIDS can be kept under control and women can bare and breast feed their children without passing on the disease. Those who ‘come out’ and admit they have AIDS are given extra food and land to grow healthy vegetables.  Most importantly the workers are offered accommodation where they can raise their families.

A visit to Van der Haak/Terrasol just north of Nairobi reinforced my perception. Good working conditions and access to bank accounts. M-Pesa, Kenya’s mobile payment system, has revolutionized mobile technology for millions and provides the majority of the country’s citizens with banking access.

As we walked to a local village I chatted to Pamela who works on the farm and like me is in her 50s. We discussed her desire for a stable political situation and for her grandchildren to do well at school. She introduced me to friends and neighbours in the village, all keen to share the photo with the only woman in our group. (Yes typically for our sector I was the only female with 15 men). I even got introduced to the mother of the village chief. An honour.

I recently heard in a discussion on the radio that Africans have a ‘satisfaction gene’. Perhaps that is what we are missing in Europe. Of course I didn’t discuss any sensitive issues, but my general impression is that they are happy when they have a job with a good employer. Florensis runs a project cultivating catfish in the waste water and each family gets one a month. Successful because it means food on the table and basically that is what the workers want and need most.

Oh, and I did meet a woman with a farm, or to be accurate a tea plantation started by her grandfather who arrived from Britain at the beginning of the last century coincidentally about the time Karen Blixen would have written her memoirs. The farm had been reduced over the years due to many inheritance questions and the colonial house and farm seemed to be mainly used for tea tourism, but they were still producing finest tea, mainly for the U.K. market and she certainly ‘had a Farm in Africa’.

‘The auction should stick to its basic principle’

‘Planning is actually the core of the business’