Since the removal of Robert Mugabe in November last year, there have been many changes in Zimbabwe. ZANU-PF, the party continuing to be in power, made a 180-degree turn. With political and economic reforms, they’re trying to get the country out of the low that’s it’s been in for years. Sibusiso B Moyo, Zimbabwe’s Minister of Foreign Affairs and International Trade, recently visited the Netherlands. Floribusiness spoke with him.

About halfway through the interview, Moyo puts things very simply. The former general of the Zimbabwean army, who announced the removal of Robert Mugabe to the entire world in November 2017, says that ZANU-PF reformed itself. They simply replaced all the bad things with good things and continued their work.

It all seems somewhat mystifying, though. Mugabe was the leader of ZANU-PF, and of Zimbabwe, from 1980 until the end of 2017. Under his dictatorial rule, opponents were removed and the country was driven into an economic abyss because of land reforms. To illustrate: in the year 2000, there was 1,000 ha of flower cultivation in Zimbabwe. Now, in 2018, there’s no more than 50 ha and only seven flowers growers left.

When millions of people took to the streets in November last year, this trend came to an end. In order to avoid a situation of complete anarchy – according to Moyo, there was fear for a second Somalia – the army took over and replaced Mugabe by Emmerson Mnangagwa. The new president, however, had been Mugabe’s ally for many years. Despite the fact that ZANU-PF is still in power, the country has already seen many major changes.

Moyo emphasises that Zimbabwe has undergone a great metamorphosis. “We’ve taken things into a completely different direction. Zimbabwe has come out of its isolation. We want to be a global player. We want to join the family of nations. And most importantly, we’ve started political and economic reforms”, he said on the eleventh floor of the C tower in The Hague’s WTC building. The location of the offices of NABC, which organises a Zimbabwe Trade and Investment seminar together with SANEC this afternoon. 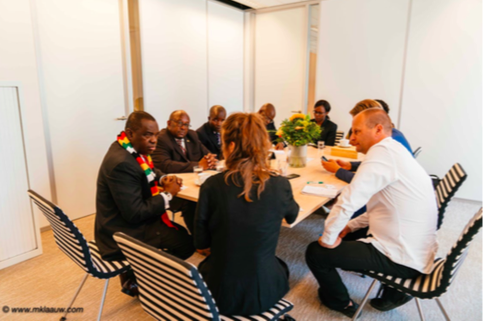 An important part of the revolution are the elections, which will be held in the country on the 30th of July. The elections will go ahead, despite the recent attack on Mnangagwa in Bulawayo on the 24th of June. The president survived, but there were dozens of injured, including two vice presidents.

Moyo explains that not everyone agrees with the changes that are taking place in Zimbabwe. Nonetheless, he describes the current situation in Zimbabwe as peaceful, calm and stable.

To make clear that the elections are free, Moyo explains that there are currently 128 political parties in Zimbabwe and 24 presidential candidates. “The forthcoming elections must be fair and transparent. They are a testimony of the freedom in our country. Zimbabwe is an open democracy. The freedom of expression is a testimony to this.”

Moyo’s words are in stark contrast with the reign conducted by Mugabe and ZANU-PF for many years. What will happen if the population isn’t going to elect ZANU-PF on the 30th of July? “The people decide. Whoever wins the election has the responsibility to govern the country. The president has made this very clear”, said Moyo. He concludes his response with a joke. “In that case, I’ll start growing roses and sell them to the Netherlands.”

Zimbabwe’s main goal is to get the economy back on track. Nothing may overshadow that goal. The explicit implication for the agricultural and horticultural industries is that the land reforms have come to an end. According to Moyo, Zimbabwe has been producing sufficient food crops to supply their own population during the past two years.

“We’re meeting our basic needs. We’re going to the breadbasket of Africa again, just like we were in the past. We’re even considering exporting food crops.”

The minister explains that the country is now ready to start producing other crops, like horticultural produce, too. That’s why he’s talking to the Dutch government. “We want to collaborate with the Netherlands and revive our horticultural industry.”

Any help is welcome: both money and knowledge, but the country’s mainly looking for investors. Moyo says that a horticultural centre will be built in Zimbabwe, in collaboration with the Netherlands, before the end of this year. He’s been talking to KLM regarding flights to Harare for the transport of passengers and cargo (fresh produce).

In October, the Zimbabwean government is going to facilitate the HortiFlor Zimbabwe horticultural fair organised by HPP Exhibitions, assures Moyo.

Until recently, foreign entrepreneurs had to partner with a Zimbabwean if they wanted to invest in the country. According to Moyo, those kinds of restrictions are no longer in place. Investing is now possible in collaboration with the government, with a Zimbabwean entrepreneur or independently, using land that’s been allocated for horticulture.

Moyo also indicated that there are already some Dutch companies with two feet on the ground in Zimbabwe, others with one foot and also some who have just boarded the plane. Companies from other European countries, as well as from the USA, are also making their way to Zimbabwe. The only limitation is processing capacity, according to Moyo.

“The president has opened the doors for business. Some companies want to wait until the elections are over. But making a start in Zimbabwe will be more expensive in six months than it is now.”

What’s Moyo’s expectation for the election results on the 30th of July? Will he be growing roses soon or will he continue to govern? “Whether I’ll keep my place in the government doesn’t matter. Being part of the government means that you’re at the service of the people. If someone else with the right skills comes along, that’s also fine.”

The Colombian Bonanza: Exchange rate in the skies