In 1959, Klaas and Gemma Schoenmaker and their eleven children left the West Frisian town of Wervershoof and got on the boat to Brazil, where Klaas started growing gladiolus. Nowadays in 2018, 29 of their descendants own the largest floricultural company in this vast, South American country: Terra Viva. Brazilian Ronaldo Micotti da Gloria is their director. “We’re improving every day, but we aren’t the best yet.”

The figures mentioned in the corporate video that Ronaldo Micotti da Gloria shows us at the beginning of our visit to Terra Viva, are impressive. The company’s cultivation acreage consists of 8,500 ha. Most of it is used for agricultural crops. Including soy, corn, oranges and potatoes.

With 1,050 ha of oranges, Terra Viva is only a small player, explains Micotti da Gloria later on. But when it comes to potatoes, Terra Viva is one of the largest in the market. And then there’s the 150 varieties of plants and flowers, the production of cuttings, their labs, bulb production and a small section of amaryllis breeding. “We don’t want to be the largest, but the best”, is one of the first things Micotti da Gloria says, when the video is finished.

They’ve got a young-plant nursery 12km from here, explains Micotti da Gloria. And 500 kilometres further north is where they grow their lilies, calla, gladiolus and amaryllis. Alstroemeria is grown at 1,300-meter altitude, as this crop requires cool conditions.

Terra Viva’s floricultural crops amount to a total of 70 ha. 20 ha is cultivated outdoors or in shade houses, the rest in greenhouses. “Some crops are grown underneath umbrellas, others such as phalaenopsis, in high-tech greenhouses”, says Micotti da Gloria aptly.

Terra Viva’s biggest growth has been in the floricultural segment the last couple of years. Their plan was to expand their food production, but due to some problems that didn’t work out. “There’s more potential in the market for food products”, says Micotti da Gloria. “Brazil has a lot of cultivated farmland that’s ready for use. And the competition in flowers is bigger than in commodities.”

“I guess my heart’s more in potted plants”, says Micotti da Gloria. When he started with the company many years ago, he was working with potted plants and later on, he became the director of their young plants and flower production sections.

“The competition in cut flowers is tougher. There are many local flower growers, all over Brazil.” With regards to potted plants, the toughest competition is centred around Holambra, that’s where the majority of the buyers are.

“The cultivation of potted plants is easier to manage too. The production of cut flowers fluctuates much more.” But the most challenging product to make a profit on is young plants, according to Micotti da Gloria. “Breeders are increasing their royalty fees, leaving less room for us to make money.

Within the potted plant segment, phalaenopsis has become very important over the course of the past ten years”, explains Micotti da Gloria. It has largely replaced saintpaulia for example, as well as the production of chrysanthemum cuttings, and it now accounts for 20% of the turnover.

Their initial idea was to grow young plants of phalaenopsis. They bought seed from a Japanese breeder. However, the young plants turned out to be hard to sell, so Terra Viva decided to produce fully grown plants themselves. After 3 years, they switched from buying seed to buying plant tissue culture. Initially from Taiwan and nowadays, the main suppliers are Dutch companies.

Micotti da Gloria can’t say anything regarding the limits for phalaenopsis, which is currently very popular in Brazil. “But it is a topic of discussion and we want to reduce our dependence. That’s why we’re scaling up our cut-flower production at the moment.” 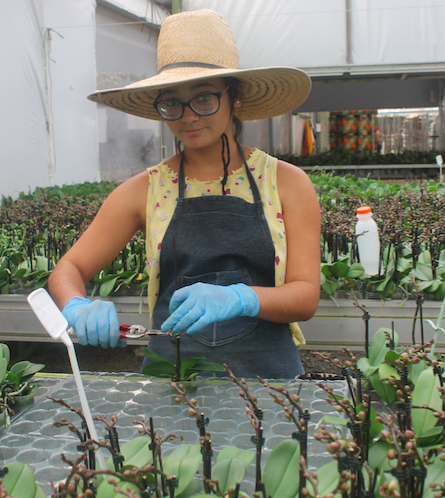 Although many things have improved at Terra Viva, Micotti da Gloria says that the company isn’t the best yet, while this is in fact what they’re aiming for. “We’ll continue to try and improve bit by bit every day, and reach the top eventually. It won’t be easy, considering our large scale. We’ve got so many crops. If there’s a problem with one of the smaller segments, it will be associated with the name Terra Viva, which will have a negative impact on the company as a whole.”

Small groups of 5 to 10 people are responsible for a product or part of the production process within Terra Viva, explains Micotti da Gloria. If targets aren’t met, the management steps in to assist and find out the cause and help solve the problem. Eventually, the groups should be able to find solutions by themselves.

There’s a large poster on the wall in the office, showing the organisational chart. Lots of employee names, followed by numbers. Numbers in black reflect a positive score, numbers in red indicate there’s room to improve. The fact that all numbers below 8 are in red shows that the bar is set high at Terra Viva.

In addition to the Toyota system, the company also exchanges a lot of information with people in the Netherlands, says Micotti da Gloria. He travels to the Netherlands three times per year, to talk to suppliers and to find out about the latest developments in the floricultural industry. On top of that, they’re also well connected to a number of universities in Brazil.

Terra Viva is a member of the auction and they have no intention to change this. “Many Japanese growers aren’t auction members. I noticed last year that they were still at the same point as ten years ago. Some of them were even in a worse position. As opposed to the auction members, who were all doing better than before. The auction collects the money and takes care of the distribution. That allows growers to fully concentrate on the nursery.

Micotti da Gloria would like to see the auction become product owner. “At the moment, a supermarket can come and talk to me and to my neighbour and end up completely exploiting us. They’re really good at that. Making the auction owner of the product is a way to prevent this. They’ve got all the necessary information to know the right prices.”

About 30% of Terra Viva’s production is sold via the auction clock, the rest via direct sales. More cut flowers are sold through the clock than potted plants. Micotti da Gloria feels that the clock is a good way to  reach smaller customers and an important tool for establishing market prices. But not without disadvantages. He thinks that the clock is used for speculation too.

All in all, Micotti da Gloria prefers intermediary services, because he knows how much he’s going to get for his flowers. “If I buy a new car, I’ve got to wait 30 to 60 days for that car to be delivered. The car first needs to be ordered. So why are we producing before our product is sold?

Before visiting Terra Viva, we spoke with owner and former director Kees Schoenmaker. In his reflections, he referred to the importance of Veiling Holambra and the auction clock for growers. He’s currently President of Ibraflor, the organisation of floriculturists in Brazil. The auction, and potted plants in particular, are doing well, but the stories he hears when he travels around the country are very different. People were hit hard by the crisis.

There’s no discussion about fees at Veiling Holambra (the fees for clock sales, intermediary services and web shop sales are all the same). “If it was that half percent that had to save us, we’d be doing something wrong at Terra Viva. It’s important to look internally and make sure that your own affairs are 100% well organised, before criticising things that are external. If the clock wasn’t there, would we still be making a difference? I feel that the clock should get more attention. Let the tool play an even stronger role in price determination. Without the clock, the only thing that remains is negotiating, and that will always put growers in the weakest position.”

A small disadvantage of the clock pointed out by Schoenmaker, is that it allows others to see what you’re growing, making copying easier.

Royal FloraHolland at risk of plunging deeply into the red in...