Despite the cold spring and the hot, dry summer, Belgian growers seem to be quite positive about the current year. Participants at Florall, the 1-day Belgian trade fair for ornamental plants in Waregem, expressed good hopes for the future, too. “Sales have picked up again during the past two weeks.”

“We had a water shortage, so we had to buy water from a water treatment company. We borrowed some barrels from a farmer and drove them back and forth. That costs money”, explained Jan Gielis of Belgicactus from Westerlo, at Florall. He was there to show a new concept for his succulents: Fabulous Fat Friends.

He wasn’t the only grower that struggled with the hot European weather. Luc van den Berghe from Nevele for example, was satisfied with his lavender sales last summer, but he did experience poor water quality. Others had to deal with irrigation bans, which were imposed during the day in West and East Flanders for a while.

Tree grower Lucas de Nolf wasn’t sure if he was allowed to irrigate during the day. He had no choice. The 30-ha company in Waregem, which he runs together with his sister Laura, includes one nursery where a round of watering takes 16 hours. If he had stopped watering them, the plants would have died within a few days and he would have had to close down his company.

The problems due to heat and water shortage in Belgium are familiar for plant and tree growers throughout Europe. It had an impact on sales and quality. Another familiar problem raised by the Belgians in Waregem is also weather related: the cold weather in the beginning of spring. “Our primrose and violas had a tough start this year”, said Isabelle Maes of Maes-Reyns perennials and bedding plants nursery in Moorsele.

Griet Decru-Leroy from Oostnieuwkerke had the same experience. But when the weather improved, the trade in bedding plants quickly recovered.

Despite the setbacks, Florall was characterised by a positive atmosphere. The Belgian growers are pretty happy about the past eight months and their expectations for the coming period are positive too. Decru-Leroy said: “We had a good spring.”

And with his succulents, Gielis said that the past three years, he’s been benefiting from the increased popularity of cactus. “We lost some sales due to the heat. But the spring season was extremely busy, and sales have picked up again during the past two weeks. I can sense there’s an interest. Green is becoming more and more popular. People are actively looking for a green experience. As long as that interest is there, our sales are good. From what I hear, most growers are doing better.”

Green plant growers also seem more than happy, although they didn’t sell as much this summer, compared to last year. Besides, according to Luc van den Berghe from Nevele no longer has that many green plant nurseries. “You’ll end up trading mostly via the Netherlands.” He stopped growing green plants a few years ago.

At the same time, some other growers are expanding their green plant assortment, or currently making a start with it. Java-Plant in Sint-Andries for example, recently added green plants to their assortment. Their booth at the trade fair included fatsia japonica, banana plant and philodendron. The company did have green plants before, but they stopped because it was no longer profitable.

Ingrid Luyssen from Devriese-Luyssen said their sales, laurel in spring and lagerstroemia in summer, went well and that the trade really took off in August.

There weren’t too many flowering indoor plants on the trade floor. That seems to be another thing that’s becoming mostly a Dutch matter. Exceptions were potted strelitzia, cyclamen, azalea and potted chrysanthemum. The latter two are struggling a bit. “But we’re still managing alright”, said grower Kristof van Laere from Lochristi. He thinks that the problems that some of his colleagues are experiencing, are due to a decrease in popularity of azalea, as well as problems regarding the quality. 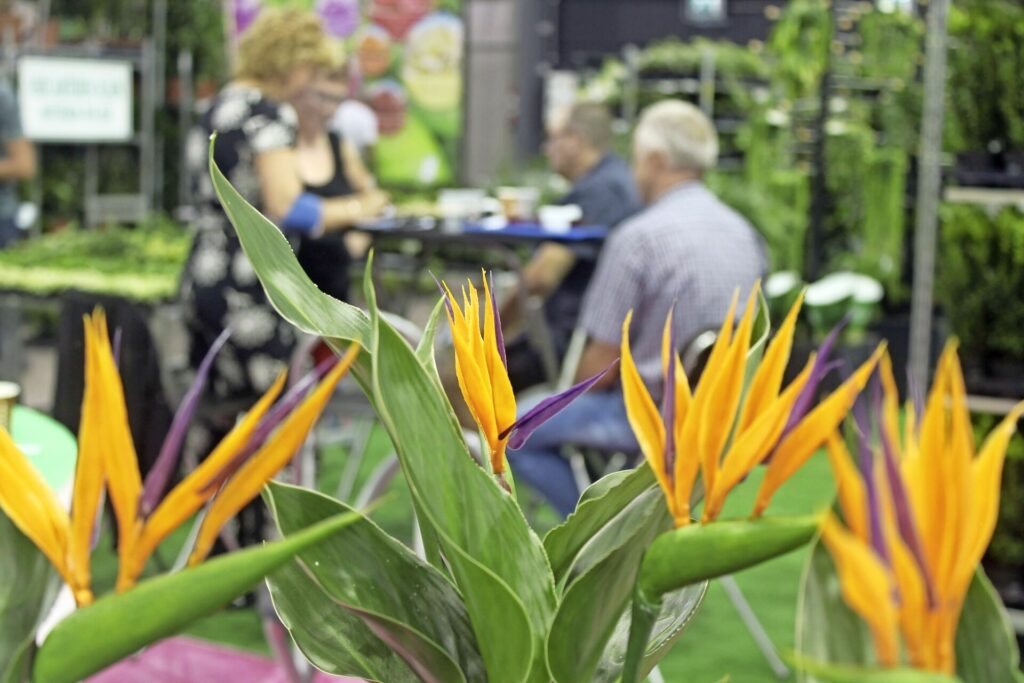 Breeder, propagator and producer Luc Pieters of Jolu Plant in Oostnieuwkerke noted that potted chrysanthemum is suffering from pressure on prices, because of supermarket sales. “Supermarkets are selling potted chrysanthemums for the lowest possible prices. This has a negative impact on the value of the product. Many growers simply gave up during the past couple of years.”

The prices for potted chrysanthemum were under a lot of pressure this summer too, but it didn’t really affect Pieters, because he didn’t start selling until last week. “Due to the heat, many plants have probably finished flowering by now. The odds might have turned”, Pieters said optimistically.