Brexit also has an impact on the application process for breeders’ rights for certain plants and flowers. With all the uncertainties regarding Brexit negotiations, the EU will no longer assign new examinations to the UK. In anticipation of Brexit, it has been decided that the ongoing examinations regarding those 500 crop varieties will be redistributed across other EU countries.

Applications submitted to the Dutch Board for Plant Varieties or the European Union’s Community Plant Variety Office (CPVO) are followed by the relevant examinations. These can take place in a number of different countries. The UK is currently handling 500 crop variety examinations. They include dahlia, geranium, clematis, hibiscus, daffodil and campanula cultivars, explains Judith de Roos-Blokland, head of regulatory and legal affairs at Plantum.

An examination can last one to two years, which means that applications that are submitted in the UK today, probably won’t be finalised before March 2019. With all the uncertainties regarding Brexit negotiations, the EU will no longer assign new examinations to the UK. In anticipation of Brexit, it has been decided that the ongoing examinations regarding those 500 crop varieties will be redistributed across other EU countries.

For cut chrysanthemum, Plantum has now requested that future examinations into new varieties will be done by Naktuinbouw. They are all set up for those tests and inspections. 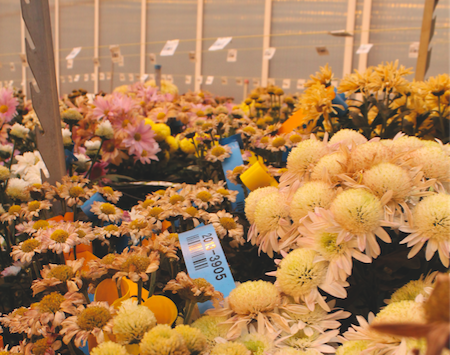 “Hopefully, the CPVO will give its official approval by March. Cut chrysanthemum is not one of the 500 crops that are examined in England at the moment. Tests for new chrysanthemums are also taking place in Poland at the moment, but their breeding facilities don’t meet the same high standards. The Polish office is mostly focused on outdoor chrysanthemums”, explains De Roos-Blokland.

So there are certain risks associated with Naktuinbouw’s investments regarding the testing of new chrysanthemum cultivars. But according to De Roos-Blokland, breeders have indicated that they are planning to have their new varieties examined in the Netherlands.

De Roos-Blokland: “This is not the most ideal situation for breeders. They were happy with the examinations in England and in the future they might have to apply for two separate examinations. But there’s no turning back now.”

Green is Life and Flower Expo Poland live in Warsaw