Scott’s Nursery, a nursery for potted plants and bedding plants in Canadian Southern New Brunswick, received so much rain and melted snow in week 19 that greenhouses were flooded. The damage ultimately remained reasonably within the limits. “Nice is different. But it does produce nice pictures “, George Scott responds two weeks after the event.

How exceptional is this rain quantity?

In the last 15 years, not much rain has fallen in Southern New Brunswick. There is also little to do with these quantities, according to Scott. Their good drainage was in any case not up to par. Rain was not the only factor in the flooding.

George: ”The rain certainly was a factor in the flooding but, the snow melt north of us played a large part in the flooding and with four large dams along the waterways above us we have many influences which affected the huge flooding.

Has Scott’s Nursery suffered a lot of damage?

“The damage has remained reasonably within the limits. It is more of the inconvenience just before an important holiday as Mother’s Day. Yet we are not really dissatisfied with the sales on this day in our garden center”, George Scott explains.

„We had a loss of traffic to our store due to so many road closures so people were not able to drive to our garden center easily. We remained open for business during the flooding but, traffic to the store was very slow.”

What discomforts do we talk about?

George: “The whole cultivation schedule has been confused, because we had to get everything on dry land quickly. And orders run into delays. We have now virtually eliminated that. “ 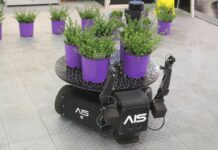 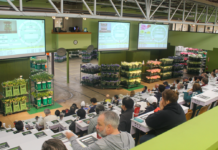