Long before the annual Chelsea Flower Show opened its doors in the heart of London last week, the event had already sold out. What’s the secret of a horticultural event that’s been around for more than 100 years, attracts 168,000 visitors in five days (the maximum they can admit), and gets around a thousand journalists to come to their press day, the day before the official opening? Floribusiness decided to have a look around and tried to unravel the mystery.

“We are the best”, replies manager Clare Greene with a smile, and she adds with a more serious undertone: “The gardens are designed by top architects and exhibitors include the best nurseries from Great Britain”, referring to the dozens of gardens that are included in the concept.

The park and the infrastructure surrounding the Royal Hospital Chelsea became the backdrop of the flower show in the heart of London during the last week of May. Greene suspects that perhaps that’s part of our success. ”You’re walking from the crowded, hectic city, straight into a green oasis”. I wouldn’t call it completely quiet though, considering how full the paths are.

The focal point of the show is the Great Pavilion, where around 200 participants exhibit their plants and flowers. The pavilion is surrounded by dozens of stalls, selling anything to do with gardening. In addition, there are many special, some foreign, themed gardens, a show that includes a flower arranging competition and the typical British atmosphere.

Fantastic marketing. An entrance ticket costs €125 and they’re all sold out. “See and be seen, that’s what it’s about”, is what for example lily grower John Koopman tweeted about the flower show and organiser Royal Horticultural Society (RHS).

The first two of the total of five days are exclusive to the members of this ancient British institute. That’s when we have to answer questions from the real experts”, says Mark Warmenhoven of W.S. Warmenhoven in Hillegom, who’s attending the show for the thirtieth time. “On the other days, you get a mix of enthusiasts and professionals, but they can be from all over the world”, is his experience.

And that isn’t true for visitors alone, participants of the prestigious event are also from all continents. Exhibitors have been profiling themselves all these years by winning a medal in their category, even if that prize giving is a complete mystery to outsiders.

“The concept and quality criteria for participants is something we’re still holding on to, with a few gradual changes. Like the last couple of years, there’s been more attention for the positive effects of greenery on people’s health and well-being”, says Greene, referring to things like the RHS Feel Good Garden. Another new part this year is the ‘Space to Grow Gardens’, which highlights the many different ways in which plants can be incorporated into our daily lives.

The Chelsea Flower Show only welcomes new participants after they’ve completed a procedure during which they demonstrate that they meet all the criteria for the relevant part of the show. “It was quite a challenge to get off the waiting list”, says Floral Fundamentals’ main flower arranger Morgan Douglas Nuth.

“The sea of flowers and the open, contemporary design of the stand appealed to us”, says Greene, elaborating on the admission of the newcomer from the Netherlands, which has a British touch with initiator Alison Bradley being from Scotland. Intrigued by their arrangement, the BBC, which broadcasts 14 hours per day, all over the world, about the flower show, spent plenty of time on Floral Fundamentals. With an eye for detail, as evidenced by the interest in the botanical Lisianthus Botanic and classic Martagon lilies.

The immense group of hundreds of participants doesn’t include too many Dutch professionals these days. Zentoo and Deliflor exhibit part of their assortment in the stand of the, also typical English, National Chrysanthemum Association. In addition to Warmenhoven, J.S. Pennings ‘De Bilt’ from Breezand has been an exhibitor for many years. “Being able to personally make new connections”, is one of the most important aspects of exhibiting here, says bulb grower Ruud Berbee, whose hyacinth varieties are exhibited in the stand.

“Wow” was the response from a visitor, when main flower arranger Morgan Douglas Nuth pointed out the glass ring of tubers, bulbs, rhizomes and cuttings, surrounding the Floral Fundamentals stand at the Chelsea Flower Show. On top of it stood a selection of outdoor flowers and greenhouse-like display cases, referring to outdoor and greenhouse cultivation. On top of those were some spherical flower arrangements and the centre of the stand featured a selfie column, decorated with 5,225 flowers supplied by Dutch top growers, including roses, phalaenopsis, alstroemeria, lisianthus, bouvardia, lily, nerine, chrysanthemums, madiba and vanda aerial roots. “The idea of this floral column, combined with the innovative watering system, is what gave us the opportunity to get a stand at this show”, explains Nuth. 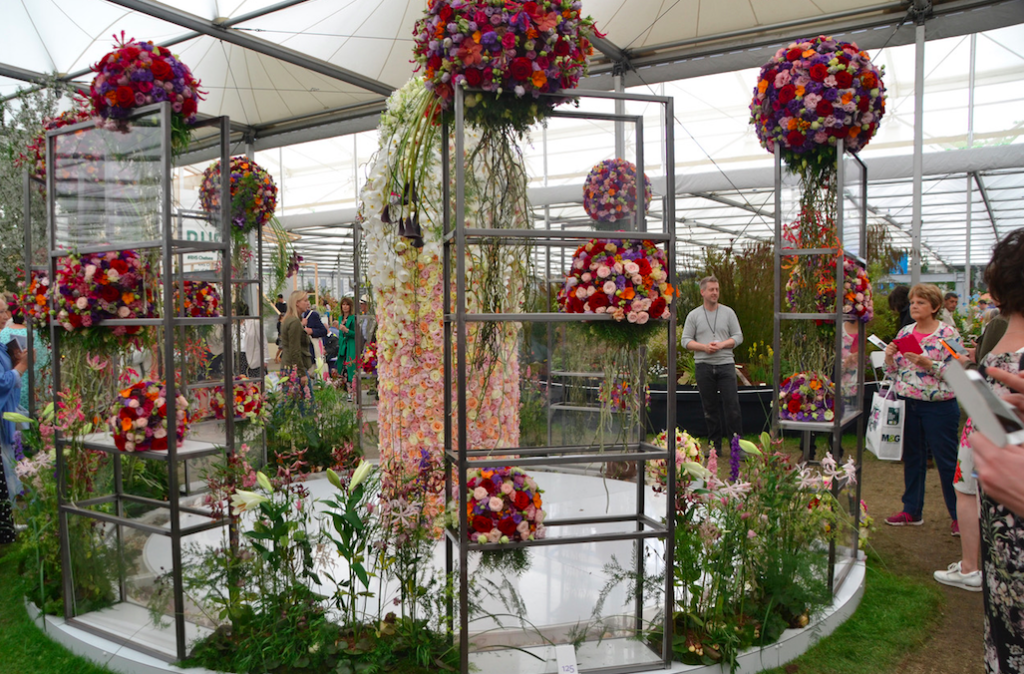 The stand symbolised the connection that Floral Fundamentals wants to make between Dutch growers of special, high-quality flowers and plants, with florists around the world. Participation in the world famous Chelsea Flower Show, which they’ve worked on for years, is the current highlight of this relatively new community. Floral Fundamentals organises three multiple-day meet ups per year. During those events, florists and flower arrangers from all over the world come to the Netherlands to visit some of the collaborating nurseries and to create flower and plant arrangements, which are photographed and published in their online magazine. Participants subsequently become Ambassadors for the growers.

“Our main aim is to provide florists with some added value and to inform and stimulate them”, says Corine van Holst of Montana Lisianthus. “And to get people enthusiastic. ‘I didn’t know that’ is a common response you get when you’re telling the stories behind the flowers”, adds Tineke Vreeken on behalf of Vreeken Bouvardia.

Van Holst and Vreeken are part of the group of growers who were manning the stand at the show in London. “Sharing the personal story of the width of the assortment is an important objective”, explains Marius Dekker of DGI, participating trader together with FleuraMetz.

A team of international arrangers used thousands of Dutch flowers for the eye-catching open stand of Flower Fundamentals.