In 2017, Disneyland Paris is going to get a colour garden, designed by Jacqueline van der Kloet and Manon Hazebroucq, right opposite the Newport Bay Club Hotel. It concerns a pilot project and the idea is to repeat it in different locations in Disneyland Paris the following years.

The location, the design, as well as the size of the 3,000 m2 garden are expected to attract the attention of millions of visitors. The Blooming Breeders foundation is coordinating and stimulating collaborations around the Dutch Garden project on behalf of a consortium of companies and organisations. It’s still possible to register as a participant.

Click here for a video in which Jan de Boer, of Barendsen Flowers, and others explain more about the garden in Disneyland Paris.

The Dutch Garden in Disneyland Paris concept was introduced to people from the industry by volunteers, who are manning their own stand at the HortiContact trade fair in Gorinchem from the 14th until the 16th of February.

Following the kick-off of the project in the beginning of February, the aim of the presentation in stand 184A at HortiContact is to give members from the floricultural industry the opportunity to become a participant in the project. The stand at HortiContact can be spotted easily, with a Mickey Mouse covered in red gerberas and white and blue lisianthus as the eye catcher.

The underlying idea of the Dutch Garden is that “it broadens the market, increases flower and plant consumption and through this, contributes to more happiness and better health. It’s something that everyone in the floricultural sector can benefit from.”

Jan de Boer: „We would like to have Dutch Garden in Disneyland for at least five years” 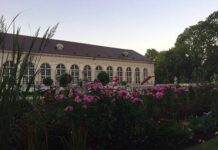