The South-East Asian country of Myanmar, formerly known as Burma, is keen to expand its cut-flower production. With some help from the Netherlands, the country could become a successful exporter of orchids, such as dendrobium. The former British colony also offers opportunities for Dutch flower growers, exporters and propagators. Because the Burmese love flowers and there’s a strong Buddhist tradition of making flower offerings.

Last year, the Netherlands Enterprise Agency (RVO) sent a team of experts to Myanmar to explore opportunities in the tropical country for the Dutch cut-flower industry. The specialists returned home with a report, which mentions quick wins as well as warnings.

According to the RVO report, Myanmar’s existing cut-flower production is dispersed around former capital city Rangoon (Yangon), the flower region of Mandalay and the southern part of Shan state. The sector consists of small (mostly less than 0.25 ha) nurseries with outdoor crops. The total numbers are estimated at 400-500 chrysanthemum growers, 150-200 rose growers, 80-100 gladiolus growers and 400-500 growers with niche products. The estimated acreage of flowers lies somewhere between 15,000 and 30,000 ha in total. The country imports flowers from China (lily, zantedeschia, gladiolus and carnation) and Thailand (orchids).

Flowers reach consumers via wholesale markets and traders. But the absence of cooling facilities and preservation treatment means that products lose a lot of their quality in the chain. 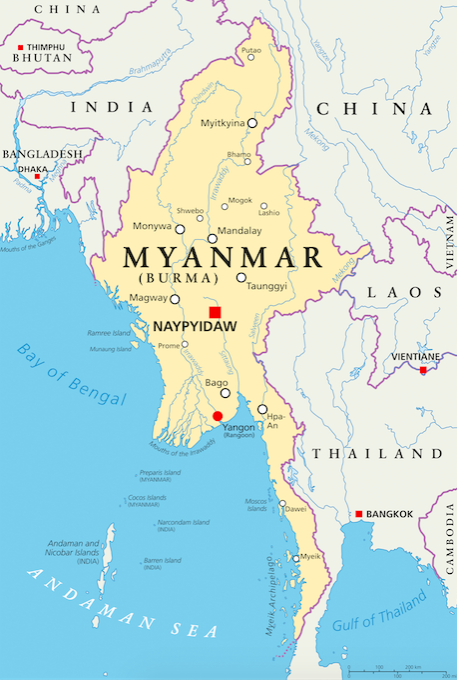 Opportunities for the Netherlands

Tien Hoang of RVO feels that there are plenty of opportunities in Myanmar for Dutch flower growers. “There is a strong demand for high-quality flower bulbs, seeds, cuttings and new types of cut flowers and bedding plants.” Anyone interested in doing business with Myanmar, should consider starting a joint venture with a Burmese partner. RVO points out that entrepreneurs can get support from Dutch NGO Agriterra and the Burmese ministry of agriculture.

With regards to imports from Myanmar, it seems like orchids (dendrobium), heliconia, anthurium and bamboo would be the most interesting crops.

Any new growers in Myanmar will have to compete with illegal imports from China. Lots of flowers and bulbs that are rejected at the flower markets in the Chinese town of Kunming, are dumped in Myanmar. Furthermore, RVO says that you’ll need a strategy to prevent others from running off with your plant variety protected plants.

And remember that you won’t find any suppliers and greenhouse builders. Fertilizer and pesticides are available, but expensive.

According to the World Bank, Myanmar is one of the fastest growing economies (7.1% annual growth), but it’s also a country with regions of great political unrest. Think for example of the hundreds of thousands of Rohingya Muslims who were forced across the border, into Bangladesh, by Buddhists recently. All in all, Myanmar is still a poor country.

Flower production: chrysanthemum (60-70% of the total acreage), rose and gladiolus.