Hortipoint
Subscribe Log in
Go to the digital magazine
Home Floribusiness IFF: Flower transport continues to be important for KLM 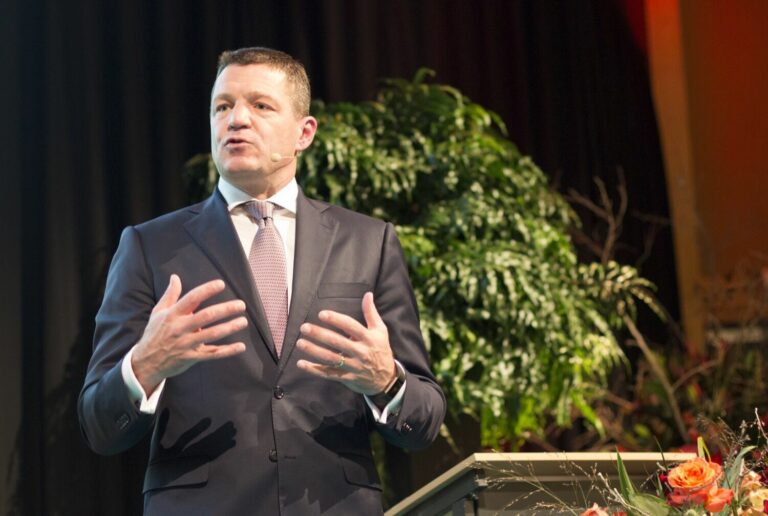 The air transport of cut flowers continues to be an important part of KLM’s cargo division. This is what Pieter Elbers, CEO of KLM, said at the International Floriculture Forum (IFF) in Vijfhuizen. He has noticed changes in the air-freight chain of flowers, though.

Elbers told the international audience consisting of 300 participants from 40 different countries on the eve of IFTF that KLM is investing heavily in improving the capacity and quality of its cargo division. This comes after their thorough restructuring of the past five years, which included the termination of 7 out of 11 cargo planes. According to Elbers, things are going in the right direction again now: “Our annual cargo turnover is increasing by three percent now.”

Elbers used some figures to underline that flowers are important for the KLM air cargo division. They mainly focus on e-commerce parcels, pharmaceuticals (including medicines) and fresh produce including flowers for their cargo transport. Flowers account for around 30% of the turnover of fresh produce and around 10% of the total cargo turnover. “It illustrates how important flowers are for us, and that won’t change”, emphasised Elbers. Their flower transport regards mostly imports from Ecuador (more than a third of the turnover), Colombia and Kenya.

According to Elbers, the air-freight chain is changing. Consolidation, digitalisation and sustainability are all playing a big role. The CEO also sees parallels with the changes that took place in passenger aviation. The introduction of online flight bookings meant the end for many travel agencies for example. “In the cargo transport sector, the links that are no longer adding value due to digitalisation, will also be removed from the chain.”

And just like for passenger transport, the cargo transport sector might also get low-cost airlines. “That’s almost certain and it will bring new challenges, which we must try to find an answer to”, said Elbers. The maximum number of flight movements per year that Schiphol is allowed by the government, could pose a threat. Passenger flights could gradually push cargo transport out. “The current limit of 500,000 flights is a political decision. From a physical viewpoint, Schiphol still has room to grow, there isn’t a real limit”, said Elbers, clearly expressing his hopes for political flexibility.