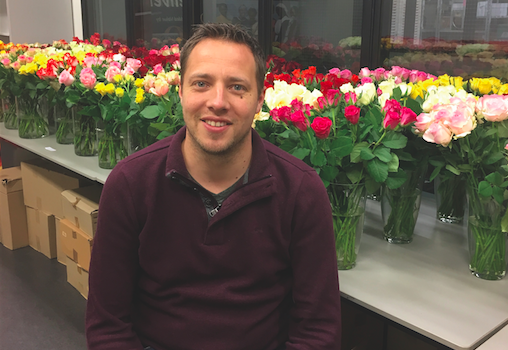 Why did you decide to go to Ethiopia?

“After we’d completed our studies in Business Administration and Plant Sciences respectively, my brother Wim and myself joined our parents in their business, a 3.3-ha rose nursery in Rijsenhout. But rose cultivation was becoming less profitable in the Netherlands, due to the increasing costs and the imports from Africa and South-America. So we decided to start a rose nursery in Ziway, as part of the Sher Ethiopia project. Our greenhouse in Rijsenhout is filled with cut hydrangeas nowadays.”

“In my final year at university, I studied which African country offered the best business opportunities for a rose farm. In those days, the safety in Ethiopia was an important advantage which they had over other countries. Ethiopia has a good climate, there’s little to no corruption and the country offers favourable conditions to investors with regards to taxations and loans. The population is proud of their country and wants to collaborate. And the fact that it was relatively easy to start up with Sher Ethiopia through a lease-purchase construction, really helped.”

How would you describe the country’s safety these days, after the riots of 2016?

“It’s been calm here for quite a while. The riots were local. Even though there weren’t any incidents in our region, everyone’s alert now. The Dutch government, the Agricultural Counsellor and various Ethiopian authorities are really on top of it at the moment, but you can’t expect 100% safety anywhere of course. The Ethiopian delegation who spoke at the seminar pointed this out too. By African standards, Ethiopia is still a very safe country. The feeling of freedom still prevails. That’s how I feel, too.”

How do you like the country as an entrepreneur?

“It’s still Africa of course; nothing is easy. You’ve got to adjust. Lots of things are changing and developing. But the educational system is still behind. The infrastructure isn’t as far along as in the Netherlands either, but with all the heavy investments made these days, it’s going in the right direction. All our staff are Ethiopians – 1,200 people, most of them with little education. That isn’t always easy. But what we do in our company can actually be considered an excellent form of development work. It’s really satisfying when people develop themselves within our farm. Some of them started out as a labourer and have very important functions with the company now. Collaborating and respecting each other, that’s essential.”

Any plans to expand into the new horticultural area Hawassa?

“There are always plans, but expansion isn’t our goal. We currently have 38 hectares in production and ship 100 million roses to Royal FloraHolland’s auction and to clients in Japan and Dubai each year. We manage our processing and sales activities in the Netherlands ourselves. We’re not a low-cost business. We want to distinguish ourselves through a high level of quality. Expansion doesn’t necessarily lead to higher profits. We’re currently making a good living.”