Aeronautical engineering students have received a lot of grants to develop drone use in greenhouses.

It is a restart of a project that four students had begun two years ago: Lucien Fesselet from France, Bram Sanders from the Netherlands, Chris Ramsay and Will Simmonds from the UK.

They developed a drone for use in greenhouses and tested it for crop monitoring in a few Dutch ornamental nurseries, including Bunnik Plants. They also demonstrated their drone at several events, like last year a drone conference for nurseries organized by Hortipoint, publisher of this website. 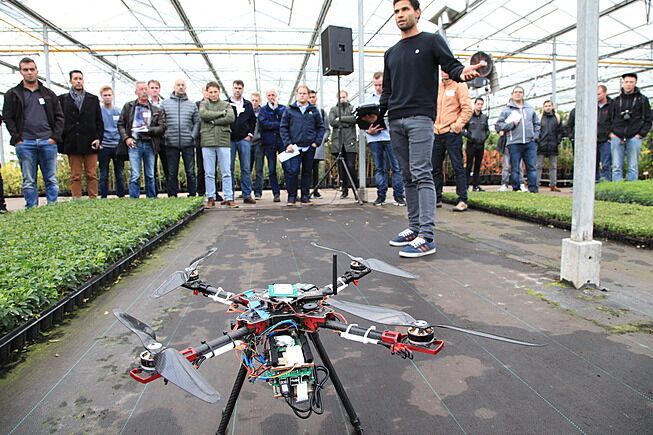 This first project was so successful that the students set up their own company, Applied Drone Innovations, to continue their development for practice. They tried to obtain funding, which failed a few times.

However, recently they managed to win funding from the Netherlands Organisation for Scientific Research: nearly €300,000 for the university project in cooperation with small and medium-sized businesses. The total budget is €600.000; the other half is from Inholland and project partners.

Several institutes and companies are now involved in the project. The aim is to develop a drone system that can measure crop yields and quality, autonomous and with a high accuracy. Benefits for the nursery will be a better quality and better pest management.

Arie-Frans Middelburg - 26 februari 2021 0
Many growers, especially in Europe and Africa, have a relationship with Royal FloraHolland (RFH), the largest plant and flower marketplace in the world. The...