The 8th edition of the International Floriculture Trade Fair (IFTF), to be held at Expo Haarlemmermeer in Vijfhuizen, is getting ready for a bigger trade show than ever before. IFTF 2017 will be held from Wednesday November 8 to Friday November 10 and open daily from 10:00 hrs. to 18:00 hrs.

This year the size of the venue has increased from 13.000 m2 to 25.000 m2’s.  About 275 exhibitors from Holland and abroad will this year fill the four exhibitions halls. The biggest number of exhibiting flower growers come from Kenya, Colombia, Ethiopia and Ecuador at this year’s edition of IFTF. 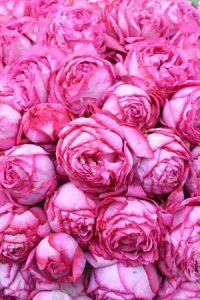 IFTF Expo was able to grow big in a relatively short time simply because it kept tied to its core business, says Dick van Raamsdonk. ”The IFTF is principally set up for growers and buyers, so producers meeting traders of flowers. This basic exhibitor and visitor profile has to be clear and the reason why we don’t really work with Themes. It would just distract too much. The most important guideline we follow is listening to our clients and implementing that, whatever they say is important, so they can show their best products in the best circumstances. They must rely to count with a big and high number of quality flower buyers. That is our focus and commitment.”

Attracting florists became a real point of attention a couple of years ago and as a result integration of this important part of the floriculture chain became an important focus in the international promotion campaign of the fair. It worked and the number of florists attending IFTF increased and is steadily increasing since. The event “World of Flowers” that takes place during IFTF is also growing and attracting more retailers and florists every year from inside, but especially from outside the Netherlands.

Flower design competitions and demonstrations have been implemented gradually as part of the side events that IFTF incorporates. Several international renowned flower designers will for example battle for the famous “Wim Hazelaar Trophy” during the three days trade fair.

Victor van Dijk - 21 januari 2022 0
We are at the onset of what will probably be the craziest weeks ever. As Valentine’s Day production reached its peak this week, air...