“The warehouse is large enough. If I’m going to expand again, I won’t have to worry about that.” Richard Weimeersch has completely flattened the hill that he bought in Brazil. We’re in his office, there’s a scarf on the wall. An Ajax scarf…

Richard grows celosia and capsicum on a total of 2.5 ha. He can still expand by another 9,000 m2, without having to move around big piles of sand. A 4,000-m2 and a 5,000-m2 site have already been levelled, and they’re lying in the Brazilian sun now, waiting for some polytunnels. 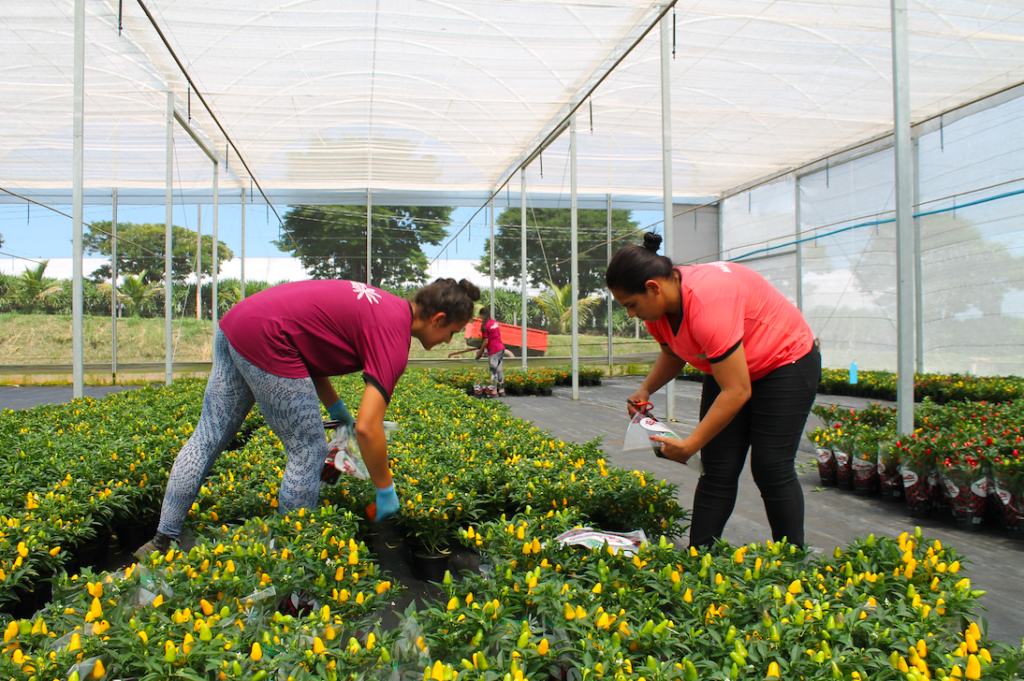 My previous visit to Richard was two years ago. During a tour of his company, he shows me what’s changed since then. He expanded in 2018, and again last year. He isn’t the only grower in Holambra and surroundings who’s expanded his business. And he isn’t the only one with more new plans, either. Just like in 2018, all the growers that I’m visiting this week are either building or planning to build.

Take the Klein Gunnewiek family. They run Grupo Ranch O Raizes.  I visited them together with a small AIPH delegation a day earlier. Elvis took us from the old to the new potted-chrysanthemum greenhouse. They’re 600 metres apart. Did we want to take the car perhaps? We all agreed we should walk, and there was plenty to see on the way. The Klein Gunnewieks keep chickens as well. And they grow hay. 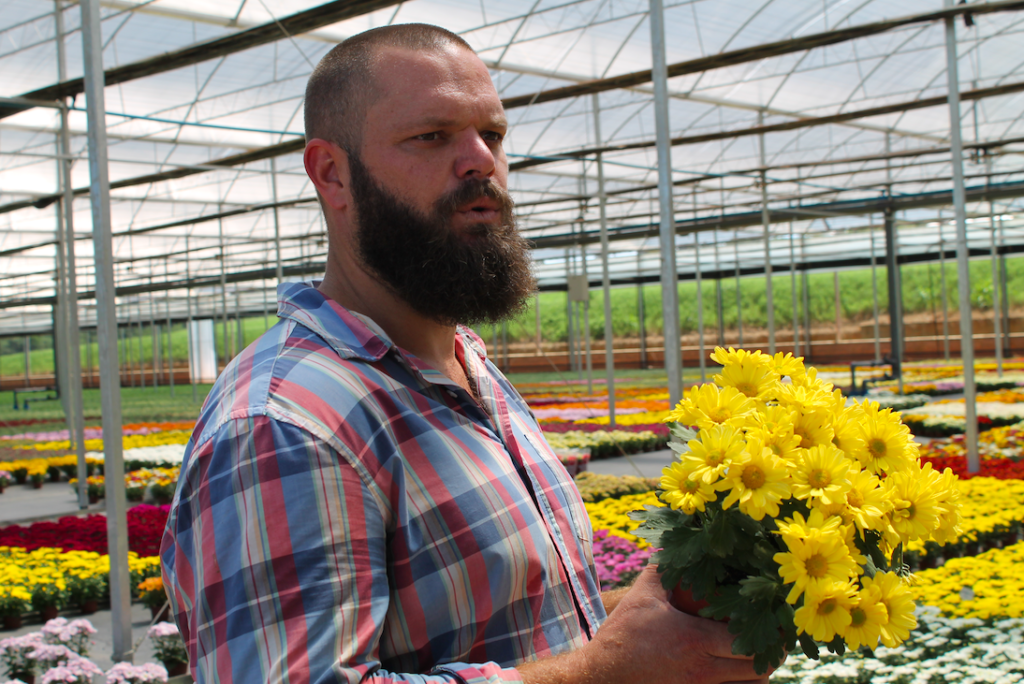 But chrysanthemum has become their most important product in recent years. They’ve got 6 ha now and there’s still room for further expansion. When we reach the new greenhouse, father Frans points at a site in the distance. That’s where the next chrysanthemum greenhouse will go.

We came across more construction works at the Van der Weijer family. They run Ecoflora. Builders were working hard on the completion of their new greenhouse. Frans and his son Patrick explained they urgently need the extra space to manage the peak around Mother’s Day in May. Our first visit that morning had been to Joost van Oene. His nursery is located in Alegre, which means ‘happy’. He isn’t the only kalanchoe grower in the area. Within a 7-kilometre radius, there are 7 kalanchoe companies. Their combined acreage amounts to 31.4 ha and their production accounts for 90% of the total kalanchoe cultivation in Holambra. 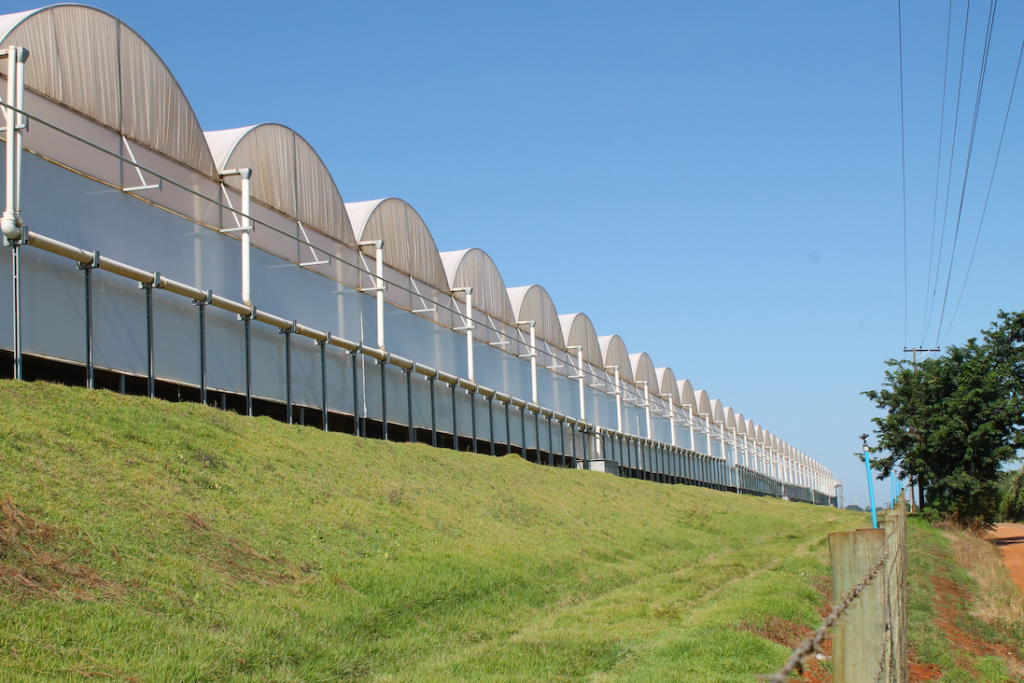 Joost and his son Ariel produce 135,000 kalanchoe plants per week on 8 ha, which makes them one of the larger growers in the region. They grow 20% of the total kalanchoe production in Brazil, says Joost. As we approach his company, we drive past the new 3-hectare greenhouse, where Oene produces 80,000 plants per week. The old greenhouses are getting a makeover. Joost reports that earlier this week, he purchased 1,650 solar panels.

The first with phalaenopsis

The second generation – Theo and Lisette’s daughters Regina and Gabrielle and their son in law Mattheus – is running the family business now. A few years ago, Kolibri expanded too. At the moment they are running 4ha of phalaenopsis. The company is investing in a new wood boiler. The old one broke down. 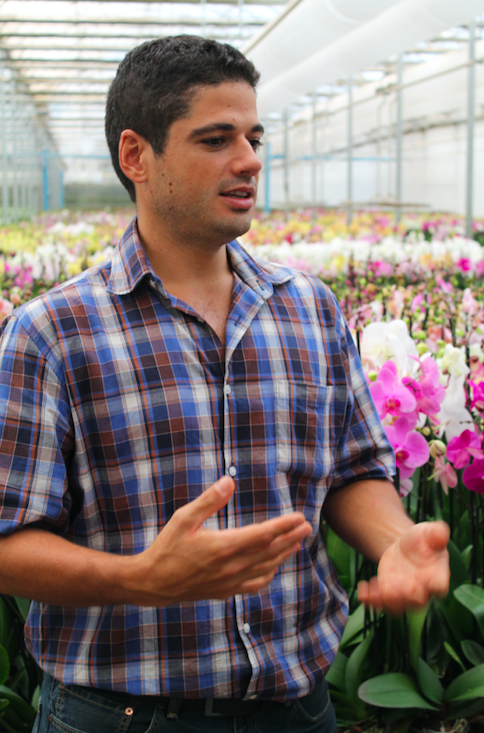 The company visits give the impression that the Brazilian pot-plant sector is doing well. Companies are expanding and their turnover through Veiling Holambra is increasing. The auction, in its turn, does everything it can to enable and facilitate further growth. That’s still the same picture I painted two years ago.

An important reason for the current growth is the expanding distribution market as a result of supermarkets’ increasing plant sales. It’s something the auction has strongly focused on, for example by exhibiting at a trade fair for supermarket suppliers. The auction’s customer base includes more than 70 supermarkets by now.

So, is it all gold that glitters in Brazil? No, definitely not. Growers indicated that the margins are getting smaller. But overall, they’re optimistic. Prices for International Women’s Day were good. Even if the Brazilian economy hasn’t been great for a while. That’s something the flower growers have had to deal with for years.

The latest challenge is the coronavirus, which has a large impact on the South American country. China is Brazil’s most important trading partner, so the situation is hitting their economy hard. “How is this going to affect the plant trade?”, wondered Richard Wiemeersch, among others.

Whether the Brazilian pot-plant growers will continue to thrive, remains to be seen. They’ve got enough plans for the future anyway. Richard is one of those growers with lots of ideas. I wonder whether he’s already started planting the last 9,000 m2 of his hillside nursery. I promised I’d return for another visit soon. I should remember to bring over an AZ Alkmaar scarf for him then…

‘Being a farmer is not for everyone’