The number of different ways to purchase flowers via auctions is increasing all the time. For a long time, it was just the auction clock and direct sales, but auction presale was added a couple of years ago. More recently, Royal FloraHolland in the Netherlands and Veiling Rhein-Maas in Germany have been trialling a virtual auctioning system (af-tuin veilen). Ontario Flower Growers Co-operative in Ontario (Canada) has already been operating a virtual auction for four years. Plants and flowers are also sold via several other innovative ways at the auction in in Mississauga

Two years ago, Jack VanderMaas (55) took over as director of the Ontario Flower Growers Co-operative (OFG). The former haulier succeeded Ben Vellekoop. When VanderMaas took on the job, he was given the task to attract more customers and get more growers interested in doing business via the auction. “It won’t be easy, but I’m convinced that the auction has enough unique selling points for growers and buyers”, is what VanderMaas said at the time.

The auction does indeed offer many ways to trade plants and flowers. Our columnist, pot-plant grower Angelle van Kleef of Colourful Gardens, recently listed some of them: auction presale, virtual auction, physical clock, cash & carry, intermediary services and warehouse sales. Most of these, apart from warehouse sales perhaps, are not unfamiliar to growers and buyers in the Netherlands. Warehouse sales means that buyers can buy products that were bought back by the grower during the auction (at the buy-back price/minimum price set by himself) after the auctioning process.

One of the many ways for growers to sell their plants and flowers at OFG is the virtual auction. Last October/November, Royal FloraHolland trialled a virtual auctioning system in Aalsmeer with exclusive plants in their TomorrowPlant programme. The pilot is on hold and will resume in January. Veiling Rhein-Maas trialled Today-for-Today auctioning for calluna and calocephalus last October. OFG is ahead in that regard. In Mississauga, the trialling period for a virtual auction is well and truly over; they’ve already been selling via their virtual auction for four years now. 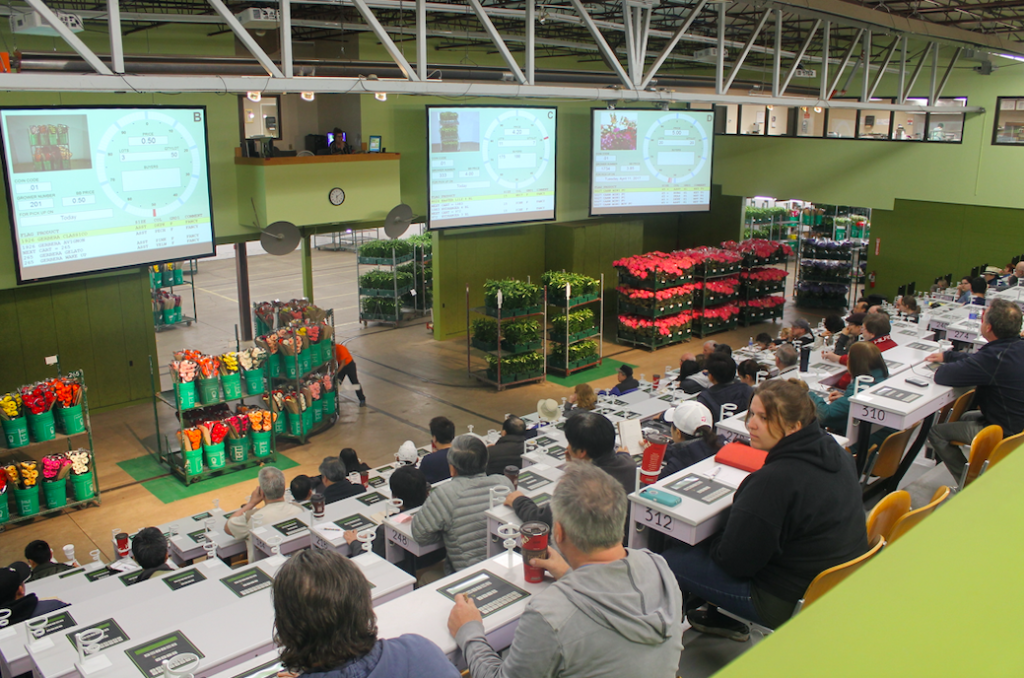 When Vakblad voor de Bloemisterij/Floribusiness visited OFG in April 2017, they saw how two of the four clocks were used for virtual auctioning – one for local growers and one for imports. At that time, there weren’t too many growers using the system, though. The author of this article observed that auctioning through the virtual clocks was over in ten minutes that day. Without giving any exact figures, VanderMaas confirmed that nowadays, the virtual auction still isn’t very popular. “It’s been developing during the past two years, but it’s still only a small part of the turnover.”

Products sold through the virtual auction at OFG include both pot plants and flowers, local as well as imported. VanderMaas views the virtual auction as something positive, but also as a challenge, because not all growers want to participate. “We’ve got to assist them initially and after a while, they can do it themselves.”

As VanderMaas pointed out, an advantage for the growers is that they only pay commission on plants and flowers that are actually sold. The advantage for the auction is that it requires much less handling. According to VanderMaas, it’s important that growers are consistent and supply regularly. “If buyers know they can always get gerberas via the virtual auction, they’ll start buying that particular product in this way. They know then, where they can get that yellow gerbera that they’re looking for.”

Finding the right ‘supply rhythm’ is the trickiest part of the virtual auction, said VanderMaas. Demand fluctuates from one week to the next. That’s why price is such a big thing, explained VanderMaas. If gerberas are sold for 70 cents one week, it doesn’t mean they’ll be sold for 70 cents again the week after. Growers need to take this into account when they set their minimum price for the virtual auction.

Virtual auctioning takes place a couple of days a week. There are no limits, explained VanderMaas. All flowers and plants can be sold via the virtual auction. Local products are sold via the virtual auction on Mondays, Tuesdays and Wednesdays. If the plants or flowers are sold for the minimum price or more, the grower delivers them to the auction the following day. Any plants and flowers that aren’t sold, simply stay at the nursery. Growers can then try and sell those in a different way.

VanderMaas assured that buyers always receive the plants and flowers they’ve purchased through the virtual auction. “That’s usually not a problem. Apart from when there are exceptional circumstances, like a hurricane in Miami or a snowstorm in Pennsylvania. But normally, if a grower agrees to sell a box of flowers through the virtual auction, that box is also delivered to us.” 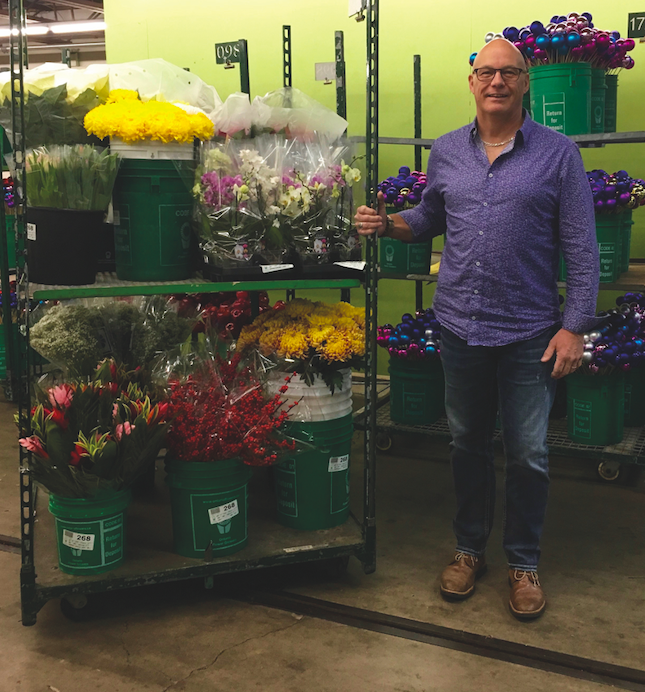 Another segment that’s been getting bigger at the auction is cash & carry. VanderMaas: “Buyers can buy flowers by the bunch, as well as individual potted plants. Even if cash & carry is still in its early stages, the sales figures are looking good so far.”

The many different ways to purchase are helping OFG survive. Former CEO Vellekoop carried out a large reorganisation. After that, there’s not much more to save on the cost side. The organisation is as flat as can be, said VanderMaas. That’s why OFG is trying to be more attractive for growers and buyers, for example by offering a wide range of ways to purchase. VanderMaas has noticed that the number of members is still the same as when he started. The auction has 40 members and 80 to 90 suppliers. Around half of the 410 registered buyers are active.

Growth is still the auction’s main objective. “We’ve lost a few growers, but also attracted some new ones. Things aren’t easy at the moment. Cannabis growers are buying many of the former floriculture greenhouses. Having said that, some flower growers are expanding.” VanderMaas wants to remain hopeful about OFG’s future. “Because I’d like to keep my job,” he joked, and then adding in a more serious tone: “The auction has existed for 47 years. It’s unique. And so far, we’re still managing to be self-sufficient.”