A Dutch institute for food safety (RIKILT) has found  foreign DNA in orange petunias.
They were asked to conduct the research after the Finnish Food Safety Authority (EVIRA) had come to this conclusion earlier.

RIKILT has confirmed the presence of foreign DNA in the varieties Go!Tunia Orange, Sanguna Salmon, Viva Orange, Viva Fire, Viva Orange and African Sunset. The DNA markers that were tested for, were not found in the orange coloured petunia varieties Cascadias Indian Summer or Sanguna Patio Salmon.

The Dutch association for the plant reproduction material sector, Plantum, won’t name the breeding companies involved; they prefer to focus on finding a solution to the problem, partly because it concerns unintended GMO. It’s doesn’t look like this was something that was done deliberately.

The Dutch Human Environment and Transport Inspectorate (ILT) is going to investigate this assumption, though. They’ve been asked to find out about the origin in a European context. Companies that bred orange petunias with foreign DNA must submit all relevant documentation.

In anticipation of the outcome of RIKILT’s research, the distribution of the applicable varieties had already been stopped and distributors informed. ILT has now ordered for all material to be taken out of the distribution channels and returned to the breeding companies. They’re waiting to receive further instructions from the Netherlands Commission on Genetic Modification (COGEM) with regards to how material should be destroyed.

The finding of GMO in orange petunias doesn’t seem to cause any technical damage, as there isn’t any risk to humans, animals and environment as far as we know. But there’s definitely some emotional and image damage, according to Thijs Simons, senior policy advisor with Plantum: “Luckily, the petunia is an annual plant, so it can all be cleared within a year.”

Petunia is a relatively small product, with a global production of 55 million plants, less than 10% of which are orange varieties. 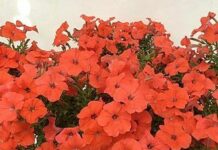