All priorities listed in the revised FloraHolland 2020 strategy are on track, but CEO Steven van Schilfgaarde isn’t completely without a worry. It seems like the unity between trade, auction and growers is under great pressure in the Netherlands. Van Schilfgaarde: “Putting an end to the strength of the Netherlands – the collaboration in the floricultural industry – certainly isn’t in anyone’s interest.”

Eight months after taking up the post of CEO, Steven van Schilfgaarde can be satisfied about the progress the auction is making with the three priorities they identified. Floriday is on schedule, logistics services have improved and the IT differences between the various branches are coming to an end, reports the CEO on the fifth floor of the Naaldwijk office.

Floriday has expanded significantly during the past six months. “We’re all set for the roll-out now and we’re connecting more and more customers and growers to the platform. We’re really getting some traction now. The number of transactions has increased by 35% across the entire system and the turnover via Floriday has increased by a quarter. That’s tens of millions of euros we’re talking about. All growers will be moved to the new system by the end of the year. Our goal is that at least half of those 4,000 members will be actively using the system. What’s nice is that those who’ve already made the transition, are very enthusiastic about it.” 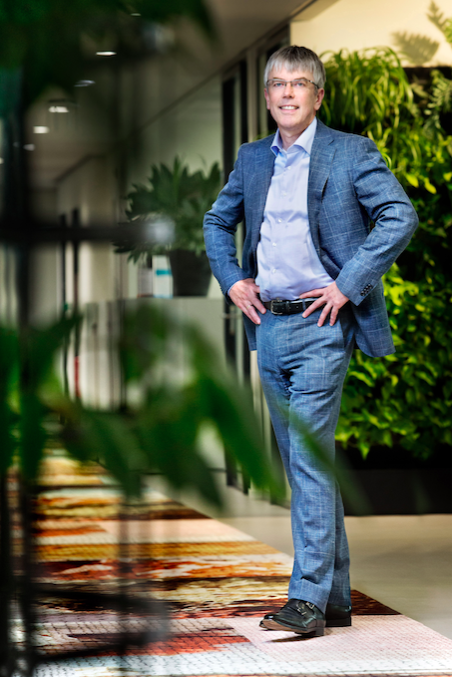 How about linking other platforms to Floriday?

“We can begin linking other platforms to ours now. We’re in touch with all other platforms, and we’re exploring the possibilities. We’ve made some suggestions and we need to discuss together whether they’re feasible. I’d already publicly invited some other platforms before, but it takes two to tango.”

Is linking Blueroots still an option?

“I hope so. Royal FloraHolland is a not-for-profit cooperative. We’d like to see the entire floricultural industry move forward under our leadership. But that’s only possible if everyone continues to fulfil their current role. So, I’d like to ask exporters to keep focusing on their task: the marketing of plants and flowers. Our refined strategy states it very clearly: Royal FloraHolland’s priority is to focus on their traditional role, which starts at the grower’s nursery and ends at the customer’s back door. And that’s exactly what we’re working on at the moment. People are enthusiastic about our strategy, so hopefully, the decisions required to link other platforms to our system will be finalised soon. It would make the entire sector more efficient. That’s very important and secondly: it will give everyone a chance to position themselves with a focus on their own role in the value chain.”

Chairman Jack Goossens expressed his concerns a while ago, fearing a ‘Greenery scenario’ if Blueroots doesn’t join.

“Putting an end to the strength of the Netherlands – the collaboration in the floricultural industry – certainly isn’t in anyone’s interest. If everyone starts out for themselves, the sector will be less efficient, and the Dutch floricultural industry will seem less powerful. So, it’s in everyone’s interest to maintain a joined infrastructure where we can find each other. It also allows us to respond to trends on time. Digitalisation means that we can see when traders’ stock goes down and we need to speed up the supply. We’ll all have to work together, if we want to operate more effectively. At the end of the day, and I really consider this part of my role, I want to keep the sector together. From my conversations with growers and customers, I’ve learned that collaboration has always been our big strength, and it still is. I truly believe that as a country, the Netherlands plays a unique role in the floricultural industry, but it will always be a joined effort.”

Are traders worried? With Floriday, RFH might have struck gold.

“Our only interest is that the trade reaches its full potential. Growers do the growing, exporters the marketing and we facilitate. We really are the service provider who wants to help the other parties be successful. I don’t want to make the role of Royal FloraHolland bigger than its traditional role, and within that role, I want to improve the position of the Dutch horticultural industry. So, there’s no need to worry. Floriday is an open system. It’s there for traders to use, so that they can avoid certain risks in their own business model.”

Any improvements with your logistics services?

“Looking back on the past year, we’ve come a long way with our logistics services. The standard for our logistics performance is 95%, and we’re at 95.6% now. Last year, around 90% of the products made it to the buyers on time. It’s very important for our buyers to receive their plants and flowers on time, especially during peak periods. This year, we’ve delivered after 1 p.m. on only two occasions, as opposed to 25 times last year. Our new logistics system is taking shape. In our current process, 80-90% of all logistics is related to the clock sales. The transaction takes place first and after that, we start the delivery process. In the new fulfilment process, we deliver direct trade and clock sales on demand within an hour. This is really taking off now.”

You were still finalising the merger as well, weren’t you?

“The biggest step there, is that we’re automating a new system, called ILB [Integrated Logistics Business Operations – Ed.]. By the end of this year, both the supply process and the fulfilment process will be transferred to the new system. We’re working very hard on this, so that we can offer a better and more flexible service in the future and implement concepts like nationwide auctioning and Today for Tomorrow. Our current systems don’t offer the required support. We won’t be able to start with nationwide auctioning before 2020, but there will be pilots until then.”

Your priorities seem very much focused on cost savings. What do you do to realise the highest possible prices?

“The discussion about strengthening the clock is very important. A fundamental point in this discussion is that we must take the measures that will allow us to link more demand and supply to the clock. When we see growers return to clock sales, we’ve got to try and get buyers back to the clock too. We’re working on a few different aspects. Excesses, reselling, digitalisation and nationwide auctioning are all things that we address independently. We’re going to be much stricter, to avoid excesses such as those connected to reselling. Reselling will only be allowed under strict conditions. We’ll be talking about loyalty to clock sales, sustainability and next year’s fees, at members’ meetings in autumn. With regards to sustainability, I’d like to suggest accepting only plants and flowers that are accompanied by a certificate showing they adhere to the legal requirements for pesticide usage.”

Would it be an option to regulate the supply for the clock?

“That’s something we’ll discuss with our members. In my opinion, we shouldn’t regulate the supply, but make sure that supply and demand are aligned. When there’s more supply, we should ensure there’s more demand, and the other way around. Supply that isn’t sold through the clock, still ends up on the market somehow, so it still has an impact on the auction prices. And because of the competition laws, we can’t do the same as the Rhein-Maas auction. Our market position is different. What we can do though, is get a better insight into our supply, and try to find the right demand for it. We’d like to communicate more with our growers regarding their supply, so that we can manage demand accordingly.”

The aspects you listed when you spoke about clock sales didn’t include quality?

“That’s covered in a separate programme: Quality Future Proof. This focuses on the question how we’re going to address quality in a digital environment. How to get added value in return for quality? We’ve got relatively few quality standards in place at the moment, and they’re mostly specific to clock sales, so that’s something we want to differentiate. The new systems have already been designed in such a way that we can collect many more details regarding quality from the grower. Quality, sustainability and differentiation are becoming more and more important in our field.”

If you want to help growers achieve the best possible starting position, why does RFH no longer want to be involved in promotion?

“Considering our role, we’ve really got to position ourselves as a service provider who optimally supports companies and the structure in the value chain. That primarily means helping growers find a place in the market in the most effective way and facilitate customers, for optimal market results. We’re still collecting quite a sum of money for BBH, to fund their marketing campaigns, and I’ve said that Royal FloraHolland shouldn’t be the only one collecting that money, while competing platforms decide not to do it. In our Members’ Council meetings, we’ve started a discussion – whether we should still fulfil that fundraising role. We can’t have growers and traders choose competitors, because they want to avoid paying that 0.4%. Competition is good, but there has to be a level playing field.”

But if RFH is no longer going to collect that money, who will?

“It isn’t my intention to stop the promotional contributions. I just want a level playing field. We either continue to collect the contribution, or we switch to a general fee per hectare. These are the options that are currently suggested. Everyone is aware that as a sector, we’ve got large interests, as well as the responsibility to create a future. At an individual level, we’re all too small, so we’ve got to join forces, and that’s what I’m aiming for. Sales is a task for exporters. FloraHolland’s Supervisory Board and the members expect exporters to take on the responsibility of marketing and promotion. I’m discussing this with the customer platform too. They must enable further growth. Don’t forget that it’s something they’re very good at. The recent growth of the floricultural sector is because of the growth of exporters and creative input of growers, but it’s mostly thanks to exporters increasing the sales figures.”

Arie-Frans Middelburg - 15 januari 2021 0
Auction members trading with countries outside the SEPA zone will be exempt from BVO commission payments in 2021. Royal FloraHolland introduced this...

‘If you do what you always did, you will get what...

Xpol: ‘If your technology isn’t up to scratch, you’re done for’