Through the International Plant Propagators Society, nurserymen worldwide can get other ideas to solve similar growing problems.

IPPS president Peter MacDonald points this out in an interview with De Boomkwekerij, Dutch magazine for hardy nurserystock. Next week there’s an IPPS event in the Netherlands, for the first time in the long IPPS history (started in 1951 in the USA).

„Our motto is searching and sharing knowledge”, says MacDonald. „The idea behind this is that growers should not compete with each other, but with the public spending money on holidays rather than on plants.”

Through IPPS various growing techniques are spread rapidly, such as chip budding. „For trees it’s now the most widely used grafting technique,” says MacDonald, who lectured plant propagation in Scotland and wrote the internationally acclaimed book ’The Manual of Plant Grafting’.

The IPPS event in the Netherlands consists of a study tour to nurseries and other companies in the regions of Lottum, Amsterdam, Boskoop and Bleiswijk. There is also a conference in Alphen aan den Rijn, base of the tour (near Boskoop), with experts highlighting several topics.

More than 150 nurserymen and other people from ornamental industry worldwide will participate in the event. It takes place from Monday July 10 until Friday July 14. The program on Friday is free of admission to everyone in industry. Check out the full program here. 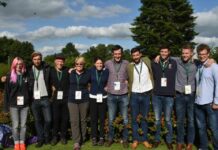 ’At IPPS you are seeking for knowledge, but you also need to share’