A participant who really stood out on Proflora in Bogotá, Colombia, was Bloomia. This originally Dutch company forces tulips in a number of countries including Chile. Tulips aren’t grown much in South America.

Their stand made for a real eye-catcher at Proflora. Among the sea of rose, carnation, chrysanthemum and alstroemeria – the flowers that are grown most in Colombia – Bloomia, a company with strong Dutch roots, showed tulips. Nico Botman explained that those tulips were forced in Chile. 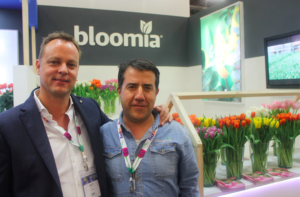 His grandfather started out in the horticultural industry in Enkhuizen, Noord-Holland province, seventy years ago. Nico’s father began with bulb growing and his company expanded into a large export company – B&B Quality – which was characterised by its high level of mechanisation. These days, the company still prepares and exports bulbs, but they no longer cultivate them.

Thirteen years ago, B&B Quality – they only changed their name to Bloomia last year – established itself on the east coast of the United States. That’s where they’re forcing tulips on water now, a concept they tried out in the Netherlands first. They’ve been forcing tulips year round for five years now. Before that, they used a 2.4-ha chilled greenhouse. They’ve got a total of 21 hectares of greenhouses in the USA, large parts of which are rented out in summer. In addition to tulips, Bloomia cultivates other types of flowers there, such as anemone, ranunculus, amaryllis and hyacinth.

After they’d established the nursery in the USA, they started their activities in Chile. Since twenty years or so, a number of different Chilean companies have been growing flower bulbs. Bloomia has been active in Chile for 10 years. But they don’t grow tulips there, their focus is entirely on tulip forcing. Year round. For the South American market. Botman lists countries like Bolivia, Peru, Panama and Colombia as distribution countries for his Chilean tulips. Botman was exhibiting at Proflora for his South American customers.

“We had to learn about the distribution channels in South America”, said Botman. “Modern communication methods make it easier to sell the tulips. It wouldn’t have worked twenty years ago.”

Bloomia has also been forcing tulips in South Africa since eight years. Those are also sold locally. The South American and South African markets aren’t big. “We’re working on a global and a local level at the same time”, said Botman. “We sell our tulips locally and each location has its own assortment. But all the marketing activities take place centrally in the Netherlands.”