Auction and trading companies seemed to be in a love-hate relationship the past few years, but the two parties have found each other again. The collaboration between Royal FloraHolland and Blueroots is a fact. “I’m glad they’ve reached an agreement. Let’s get on with it now”, says grower Jos ten Have.

It took months of hard work to develop a new model for Floriday and Blueroots. But there’s a clear plan now, outlining exactly which functionalities need to be developed the next couple of months. “There’s a lot more to it than a simple digital link. The current model also allows data exchange with regards to distribution channels and markets. That’s why it took some time to reach an agreement”, explains Steven van Schilfgaarde, CEO of Royal FloraHolland. 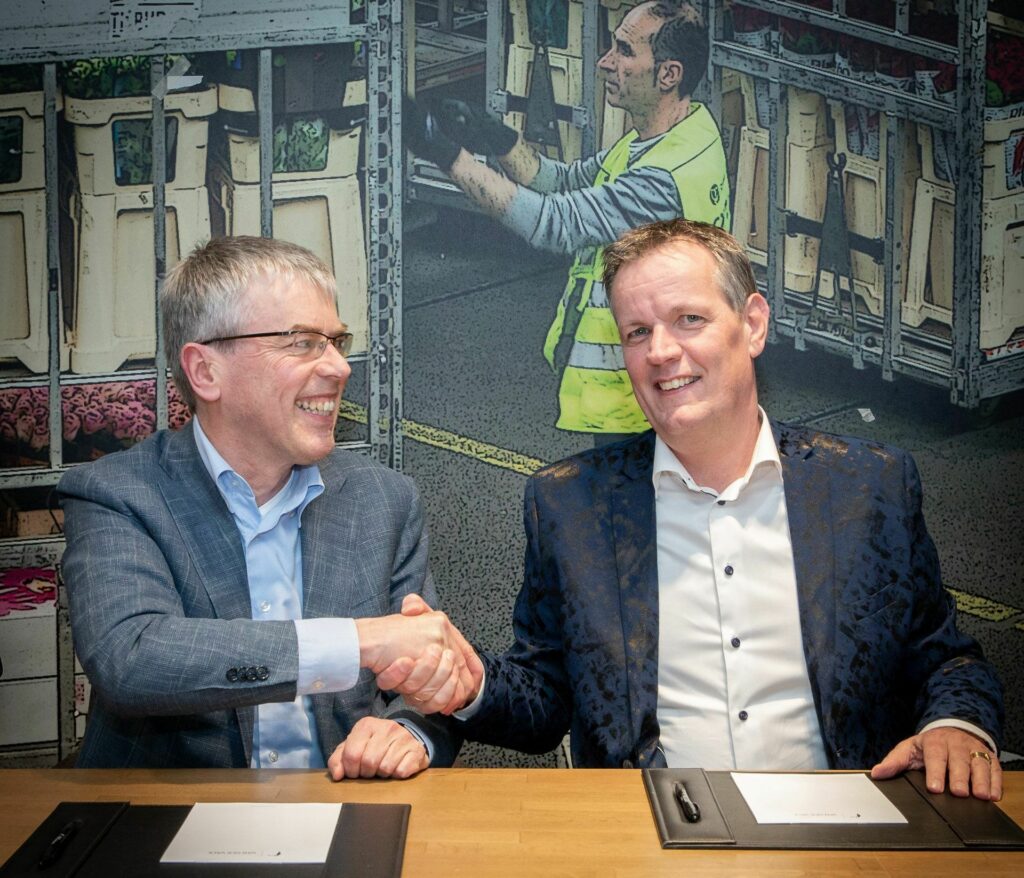 Data exchange used to be one of Blueroots’ showpieces. “We can skip the auction in the digital world, and that’s how we started out, but when we were halfway through with our system, we decided to contact FloraHolland after all. The auction wanted to make things easier for growers with a digital supply system, while we were developing an optimal system for traders with Blueroots. The two systems complement each other. Why would we be afraid to share knowledge, when we know that the auction delivers on its added value?” says Cees van der Meij, chairman of Blueroots’ Supervisory Board.

Traders will be directly connected to the auction’s digital system, which incorporates Floriday, FloraMondo and FloraXchange. This provides them with access to the full range of plants and flowers. Blueroots is particularly good at futures, so the new link means that the potential market for growers increases too.

The two parties didn’t disclose the amounts that were invested in the joint venture. But that trading companies invested in Blueroots, is a fact. Part of this money will be used for further development of the digital ecosystem. “During the most recent GMM, I announced that the auction was going to invest heavily, and this is part of those investments. Future investments in our joint digital system will be shared with the chain partners of course. Our aim is to achieve a fair distribution”, adds Van Schilfgaarde. He emphasises that the auction didn’t make any individual agreements with the 22 trading companies behind Blueroots.

FloraHolland’s Members’ Council is aware of the strategic importance of this collaboration. Their strategy committee discussed the topic with the Management Board, but the Members’ Council has no decision-making powers. “We took over certain roles from the GMM”, explains chairman Marcel van Tol. “The next Members’ Council meeting takes place on the 21st of March, so I’ll be able to give a more detailed response after that.”

Dutch grower Jos ten Have, chairman of Plantform, is glad that FloraHolland and Blueroots have reached an agreement. “The fact that both parties are now committed to this project is very positive. It is expected that many buyers will join the system. Our ultimate goal is a real-time stock system. The proposed API structure will require adjustments from the entire chain. I hope they’ll get on with it now. There’s still a long way to go”, is his opinion.

In addition to the auction’s ‘digital ecosystem’, there are currently two other platforms operating in the same market. One of those is New Green Market. According to Merthus Bezemer, the joint venture means that the situation has finally become clear. “There are platforms that belong to the auction and there are platforms that are independent. We are in the latter category. The auction has a very powerful system of course, but in the short term, it won’t affect us. All direct trade was already going through Blueroots, a platform we didn’t have access to in the first place.” He indicates that he wouldn’t mind a link with Floriday, but says that this isn’t on the table.

Floranti is the other platform that’s currently active in the market. Maurice van Winden feels that the collaboration with Blueroots is in line with the auction’s strategy of creating one digital system. However, he added, he and his platform members find their independence more important. “The number of systems for transactions between growers and traders is going down. Whether that’s a good or a bad thing, remains to be seen. Competition has its advantages. I’ll be following the auction’s next steps towards one digital platform with great interest”, says Van Winden.