Rose grower Wim Scheers, from Kontich, only invests when there’s space for it. ‘Step by step, that’s the Belgian way’, he reckons. However, that doesn’t stop him from implementing innovative solutions like his flower vending machine and LED lighting. The LED lights kill two birds with one stone: the high energy rates and the heat surplus. ‘I’m glad we ended up making that choice.’

Rose nursery Scheers in the Belgian town of Kontich is hard to miss. There’s a huge flower vending machine on the roadside, where people can choose from forty different bouquets. Even though the entrance to the company is somewhat hidden, around the corner, customers have no problems finding that either. A small door leads through to a processing area, where roses are bunched.

Customers come from all over, not just from the direct vicinity. “It’s hard to grasp”, says grower Wim Scheers. “I don’t advertise. I guess it’s all word of mouth. Shelf life is probably what attracts people. You can’t get your flowers any fresher than this.” The back of the vending machine is cooled. “We ensure that flowers are available 24/7. As soon as 25 bunches are sold, all of the family members receive a text message saying that the machine needs to be refilled.”

The vending machine contains only their own flowers, without any ornamental foliage. That’s because the grower doesn’t want to compete with the local florists. He’d be getting in the way of his own clients. And that would eventually just harm his own company.

Scheers doesn’t get involved in direct trade with end customers as long as this isn’t necessary. It’s a lot of hassle, he says. They’ve been distributing their roses through Euroveiling in Brussels for as long as they can remember. With his fourteen varieties, he perfectly meets the demand of small buyers. 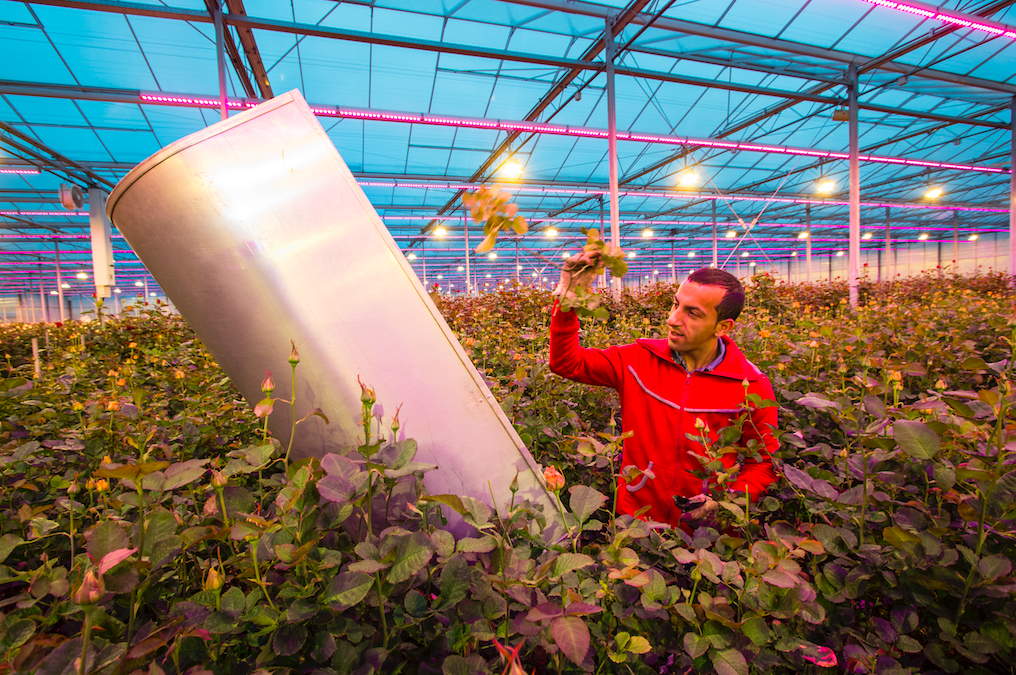 In general however, Belgian supply to Euroveiling has gone down. There are hardly ten rose growers in Belgium who cultivate using grow lights and that group of growers is ageing. Many import growers as well as Belgian growers opt for direct trade, just like in the Netherlands. As a consequence, Euroveiling has been supplementing their assortment of plants and flowers through a number of different channels. The thought behind that is that it’s the only way the auction can grow again and attract larger buyers.

Scheers has mixed feelings about this strategy. “On one hand, it leads to more competition. But in principle, it should pay off in a couple of years time.” He’s wondering whether he should perhaps sell part of his supply in the Netherlands. That comes with complications regarding licensing, though. He doesn’t have to worry about that in Belgium, where he can grow any variety he likes, but he wouldn’t be able to sell some of them on the Dutch market.

Scheers is one of the first rose growers who uses LED lights. They started with a trial in 2013 and nowadays, they’re installed throughout the entire greenhouse. It all started because of the high electricity rates in Belgium and the subsidies that were made available for CHP. The CHP that’s generated at Scheers’ nursery is enough to meet all their electricity needs. However, until recently, he still had to purchase 3,000 MW of power, because he couldn’t dispose of the heat. And that while he wanted to expand his lighting from 100 to 150 µmol, which would mean even more surplus heat. But having to buy more power wouldn’t make any sense.

The solution came when Philips visited the company in 2015, for a trial with LED lights. The results were positive and Scheers made the switch to hybrid lighting for his roses:  70% LED, 30% HPS. The 600W bulbs have been replaced by 1,000W lights. “It works well. The top petals are red, that’s new growth, which is a positive sign. I believe that the combination with HPS means we won’t have to worry about small buds, one of the problems identified in a study regarding the perfect rose. I’m glad we ended up choosing LED lights. It’s like we traded in our vintage car for a Ferrari. And our own CHP meets all our requirements.”

The CHP heat is distributed by 50°C underground tubes. “That isn’t ideal, actually. It leads to too much growth at once”, says Scheers. “And at a higher level there isn’t enough heat sometimes, especially when outdoor temperatures drop.” That’s why he’s busy installing an additional, overhead system. He doesn’t really use any shade screens at the moment, considering the existing heat surplus. 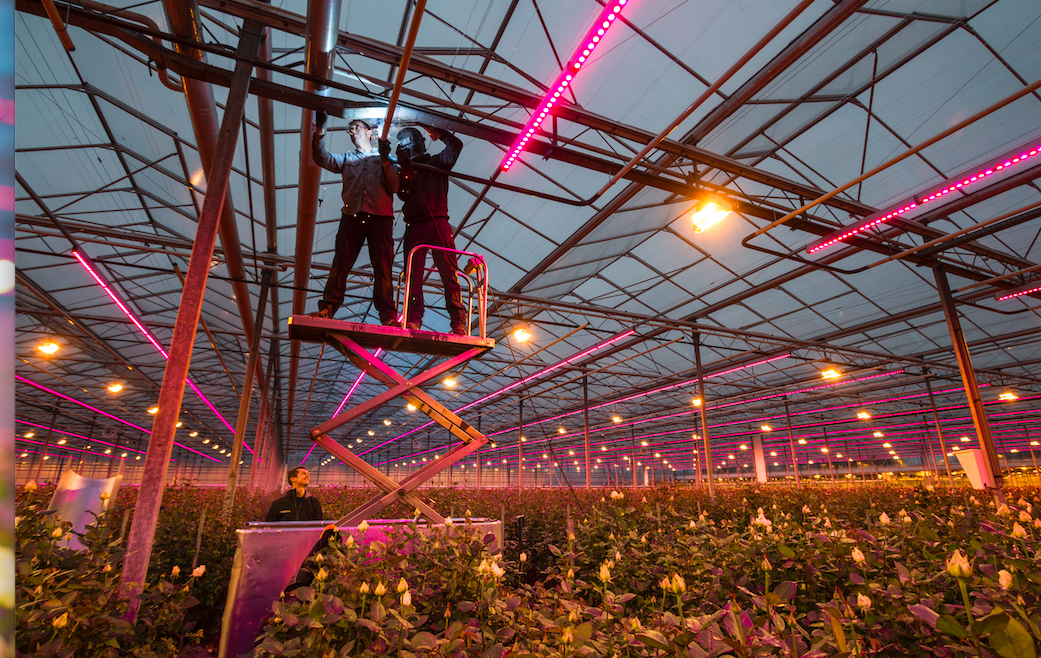 It is compulsory for greenhouses in Belgium to be dark for a minimum of five hours, between 8 p.m. and 1 a.m. Scheers doesn’t consider that as a problem. He simply turns off the lights during those hours. “Five hours of sleep is actually beneficial for the shelf life of the roses anyway. And it allows me to use up the heat from the buffer.”

Blackout screens aren’t compulsory in Belgium. But that will probably change sooner rather than later. “Discussions about light emissions are ongoing. Not with our neighbours – they feel it’s a shame when the lights are turned off. But there are many tomato growers who use lighting. People have started to complain about that.”

At Euroveiling, Scheers’ flowers are sold with an ‘Organic cultivation’ label. This refers to the integrated pest control. “The auction director visited our nursery and noticed our integrated approach. On that basis, he introduced the ‘Organic’ label, to inform buyers about the way we work.” We couldn’t maintain biological control last year though, because of problems with aphids. “We simply had to use chemicals. But we’re trying to go back to the integrated method now. I’ve been using mild products since last summer and I released fytoseiulus.”

Scheers invests step by step, when there’s space for it. “That’s the Belgian way”, he reckons. He’s planning to replace a 7,000-m2 greenhouse next year. That will leave him with one old, 5,500-m2 building. He says he might have that demolished. “It would mean a bit of a decrease in size, but production will remain the same because of the increased lighting.”

1976 Because of continuous problems with vegetable plant diseases, the company switches to roses.

1990 Installation of assimilation lighting. One of the first companies to do so.

2001 Purchase of a rose vending machine for 18 bouquets.

2012 Wim’s father gets ill. Wim has to take over the company earlier than planned.

2015 A 35-year old greenhouse of one hectare is replaced. The new building is fitted with LED lighting.

2016 The older greenhouse is also fitted with LED lights. Lighting now consists of 70% LED and 30% HPS.

‘Due to Brexit we had to hire extra staff’