Menin is the largest phalaenopsis nursery in Italy. At the recent Myplant & Garden fair in Milan, Menin was showing a new concept, which is named after ten Italian artists. Floribusiness spoke with Marco Menin, one of the many Menin family members working in the business. “Our focus is on the Italian market entirely, because we can sell all our plants here.”

What kind of company is Menin?

“We’re a true family business, started by four brothers in 1970. I am a son of one of those brothers. Nine of my cousins are currently working in the business, too. We’ve been cultivating phalaenopsis since 1990. The size of the nursery has reached 55,000 m2; we’ve had many years of growth. What my father and his brothers grew before 1990? I don’t remember, but it was definitely a variety of crops.”

Do you export any of your products?

“No, we don’t. Our focus is on the Italian market entirely, because we can sell all our plants here. Perhaps in the future, if we continue to expand, we might start exporting. At the moment, we’re selling our plants to garden centres and wholesalers. Not to supermarkets. They’re buying from Dutch growers.”

Were you affected by the crisis?

“The crisis led to changes in the market. We used to grow phalaenopsis in 13-cm pots. During the crisis, consumers felt that those were too expensive, so we switched to 7, 9 and 12 cm. 12 cm is our main size now. It’s very simple: we need to produce quality products, which are sellable. We’ve noticed that the Italian economy is slowly recovering. But we’ll stick with 12 cm for now. 13 cm is too expensive to produce and to sell.”

Are you getting any competition from Dutch growers?

“Yes, there’s a strong competition from the Netherlands. In fact, they’re our only competitors. There aren’t any other big phalaenopsis growers in Italy. We feel that the phalaenopsis supply in the Netherlands is too high. That makes for a difficult market and has an impact on us, too. When a Dutch grower sells his plants for 2 euro, we can’t ask for 5 euro. Another problem we’re facing in Italy is distribution. Especially to the south. We use our own lorries and sometimes we use external ones. The Netherlands is very good at micro distribution.”

What are you showing at Myplant & Garden?

“We’re introducing our new brand at this fair. We named ten series after different Italian artists, including Michelangelo, Raffaello, Donatello, Dante and Casanova. Caravaggio for example, is a spiral shaped phalaenopsis, Giotti is a circular phalaenopsis, and Manzoni is a heart shaped phalaenopsis. These plants come with specially designed boxes and a card. Buyers at the fair say it’s a good concept. But we need to wait and see how the market is going to respond as we start selling these products now.” 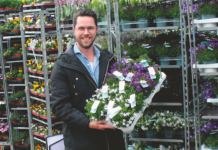 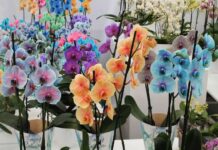 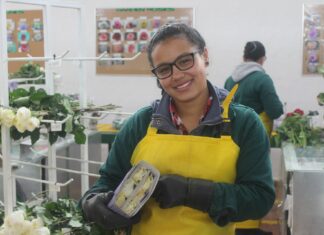