The coming week is the most important week of the year for us: the week of Mother’s Day. Still the biggest sales day for plants and flowers over here. At times like this, the strength of the auction system is evident. Prices can double from one day to the next. For cut flowers as well as flowering pot plants. Whether a digital platform will ever be able to handle such price fluctuations in such a short time, remains to be seen. For the time being, the clock is still an indispensable tool for us.

At an organisational level, we are well prepared. Last weekend, some of our customers moved to new and larger premises. Last Friday afternoon, all our employees gathered in the gallery. Under the motto ‘count on us’, we tried to make them aware of the importance of our work during this peak period and kindle their enthusiasm with, among other things, a theatre show about Mother’s Day and a barbecue at the end of the day. That’s how we do things in Brazil.

The Veiling Holambra cooperative is doing well. Turnover currently shows a 10% cumulative growth. However, some cut-flower growers are having a hard time. They are still feeling the impact of the financial crisis. We do everything we can to strengthen the market position of cut flowers.

The results of our work are showing step by step. The economy is only recovering very slowly from the long crisis period. There was talk of lorry drivers going on strike, but it looks like it won’t actually happen for now. Something that makes us all happy! An important question for the next couple of months, is whether the reforms of the social security system will be approved.

During the first week of April, I was at the AIPH conference in Noordwijk and Aalsmeer. There was a strong focus on the need to invest in greener cities. The benefits are obvious: a better (living) climate, value increase of the neighbourhood, more people out on the streets, leading to a higher level of safety and so on.

In the Netherlands, flower growers traditionally always closely followed the developments in the vegetable greenhouse sector. When consumers became wealthier, the flower industry grew. That isn’t the case in Brazil, even if many of our plant and flower growers did start out with vegetables in the eighties. At the moment, more than 95% of the 500 ha of greenhouses in the Holambra region are filled with plants and flowers.

And the knowledge of greenhouse technology is in the hands of plant and flower growers here. They are the ones investing in new production technology all the time. The production of fruit and vegetables, on the other hand, is still done outdoors or in basic greenhouses. Perhaps vegetable growers will learn from the floricultural industry in Holambra. There seems to be a demand for it from the retail side. If growers are going to invest heavily in the cultivation of vegetables, I’ll be following the developments with great interest. 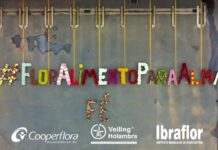 Plastic waste is a major problem everywhere, also in Africa