The Brazilians are quite superstitious, is what I learned at Máxima Flores today. And yes, the nursery of Richard Wiemeersch is named after the Queen of the Netherlands. Why? Uh… how can I say that politely?

Richard is one of the many Dutch people working in the floricultural industry in Holambra. There were two large immigration waves, immediately after World War II and in the eighties.

Richard came to Holambra in 1992. After his adventure in Australia, he found it difficult to settle in Holland, and it was via Joop van Veen that he ended up in Brazil. They were looking for someone who could help with bulb growing in the South American country.

That’s when Richard started working at Terra Viva. When the company moved its bulb growing activities to a location 500km away, he didn’t feel like moving so far away. So, he worked with Geraldo Barendse for 13 years, after which he bought a hillside plot and started his own business. He was 41 at that time. I guess that means there’s still hope for me…

What used to be no more than a massive hill, now features a magnificent, 2-ha nursery with potted celosia and capsicum. I hear that Richard can be seen at the company seven days per week and that shows. It’s looking really great, and that isn’t just because of its stunning setting. The greenhouses and the crops all look like they’re in perfect condition. He wants to expand to 4 ha within the next couple of years, and that’s big enough, said Richard, who’s originally from Nieuwe Niedorp in the Dutch region of West-Friesland.

He stayed in Brazil because of the freedom. It’s all a bit more easy-going. If a friend gives you a ring in the evening, more often than not you’d invite them over and get some meat and a bottle of beer out of the fridge. The nice weather is also an incentive of course. And, even if it’s still hard work, all in all it’s a bit easier here to put up a greenhouse.

Having said that, Richard does recognise the stories about bureaucracy. To help employees stay fit, he hired a PE teacher. She works with the 16 employees three times per week. Otherwise, they’ll be complaining about backache within no time, and take you to court.

The West-Frisian told me another interesting story. The Brazilians are quite superstitious. Also when it comes to capsicum. If a Brazilian brings home a capsicum plant, and the plant dies shortly after, they believe that they were visited by someone with bad intentions. And that the capsicum plant prevented it from happening.

The story made me a bit nervous. What if the capsicum plants in Wiemeersch’ greenhouse die after I’ve left? What would that make him think of me? That I wanted to harm him? As it happened, Richard hadn’t seen any rain for a while, and his basins were looking rather dry. Just when I was walking through the greenhouse, it started to rain. Maybe I was bringing good luck with me after all.

In the evening, I met Richard again, at a barbecue hosted by his father-in-law Kees Schoenmaker. He told me his capsicum plants were still looking great. What a relief.

And how about the name of his company: Máxima Flores? Uh… how can I say that politely? Richard feels that Máxima is a beautiful lady, very distinguished, and he really approves of her. 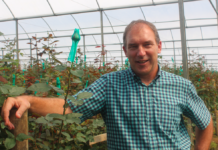 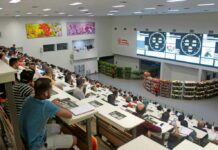