During their horticulture trade mission to the Netherlands, representatives of Brazilian FAAGROH met with Fytagoras in Leiden to sign an agreement on the ‘PlantarPuro’ project. With this concept for air-purifying plants, Brazilian plant growers want to promote the positive properties of plants among end customers and consumers. With the objective of increasing plant sales, explained André van Kruijssen, director of Veiling Holambra.

There are already some examples of air-purifying plant concepts in the Netherlands, including Air So Pure and exporter Noviflora’s Ogreen. “Those Dutch concepts are very solid, we just need to adapt them to the Brazilian market”, says Van Kruijssen. The director feels it’s important to get a university involved. 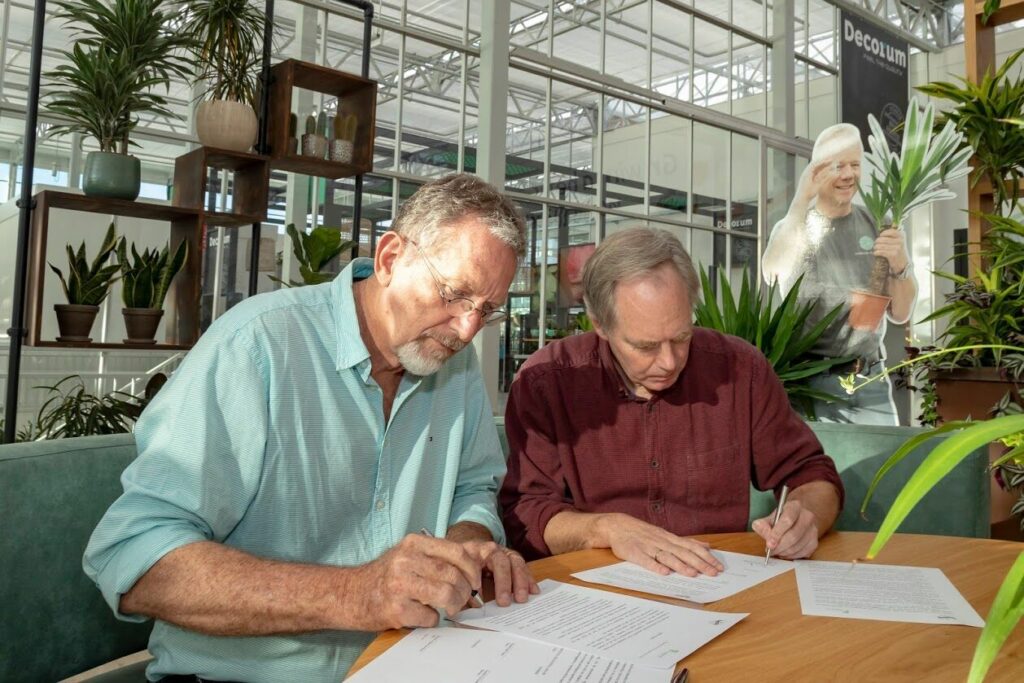 A logical party in Brazil was FAAGROH, the horticulture department of the University of Jaguariuna, which was started a year ago. Veiling Holambra wants to work with Fytagoras from Leiden to see whether their earlier research for the Dutch market fits in with the Brazilian concept for air-purifying plants. The collaboration will be led by the Brazilian university department.

“In Brazil, many consumers live in apartments and work in offices without plants, they’re surrounded by plastic and equipment instead. Just like in Europe, there’s an increasing awareness of health and wellbeing. ‘PlantarPuro’ is a way to respond to that trend and to contribute to a healthier lifestyle”, says Van Kruijssen. ‘PlantarPuro’ is the working name for the Brazilian concept, which is still in the development stage. Van Kruijssen expects he’ll be able to launch a brand by March/April.

The FAAGROH horticulture department of the University of Jaguariuna also signed a multi-year agreement with MBO Westland, Dutch institution for vocational training, last week. The organisations are going to collaborate, providing both Brazilian and Dutch horticulture students with a more international education.

The collaboration agreement between MBO Westland and FAAGROH is a way for the educational institutions to shape their international policy plans. Both FAAGROH and MBO Westland maintain a strong focus on project-oriented education and international orientation. Internships for MBO Westland students in the Brazilian horticulture region Holambra and FAAGROH students in the Dutch Westland region are an example of this. On top of that, Dutch educational organisation Lentiz Cursus & Consult will be developing a special programme for Brazilian students and (middle) management staff.

Annemieke Kruyt, account manager internships at MBO Westland: “Collaboration with regards to international internships is a must for MBO Westland. Our aim is that 80% of our students go abroad for their internship. The Holambra region has great opportunities. Our collaboration with FAAGROH allows us to work together on the accreditation of Brazilian production and trading companies as internship places. Our ambition is to offer our students a choice of at least ten accredited companies.”

André van Kruijssen, CEO Veiling Holambra: “The working methods of the horticulture companies clustered in the Dutch Westland region are an example for us. As a cooperative, Veiling Holambra wants to be the driving force for horticultural developments in our region, so the exchange of knowledge through Dutch education is very important for us. We work together with the FAAGROH department of our regional university in Holambra and we feel that MBO Westland makes a good partner for us in the Dutch World Horti Center.”

The global horticultural industry is developing in more and more different regions, such as Holambra in Brazil. Dutch horticultural companies from the Westland region, like Sion Orchids, have branches in this region. With greenhouses of up to 15 hectares, Holambra is the number-one horticulture region in Brazil.

The local university has had its own horticulture department for one year now. Horticulture companies and educational institutions want to collaborate at an international level within the chain, to exchange knowledge about breeding, trade and marketing. Managers and board members of the horticulture department of  the University of Jaguariuna and Veiling Holambra are visiting the Westland region to learn about the collaborations within Greenport.

‘Doing business online has become top of mind with many people’