Rosamina switched from rose to leucadendron and protea nine years ago. By the end of this year, they’ll have a total of 42 hectares of flowers in the hills just outside the savannah of Bogotá. Eli Perez says he’s very happy with how the farm is doing, because it enables him to contribute positively to people’s lives.

Eli Perez opens the conversation: “We began our dream nine years ago.” Actually, it was his father’s dream to grow protea and leucadendron. He’d seen the flowers somewhere and knew that that’s what he wanted to grow. Whether son Eli knew anything about them? No, not at all. But he came over from the United States, where he was working and living at the time, and embarked on the adventure. It turned out that the high altitude just outside Bogotá was perfect for protea and leucadendron. 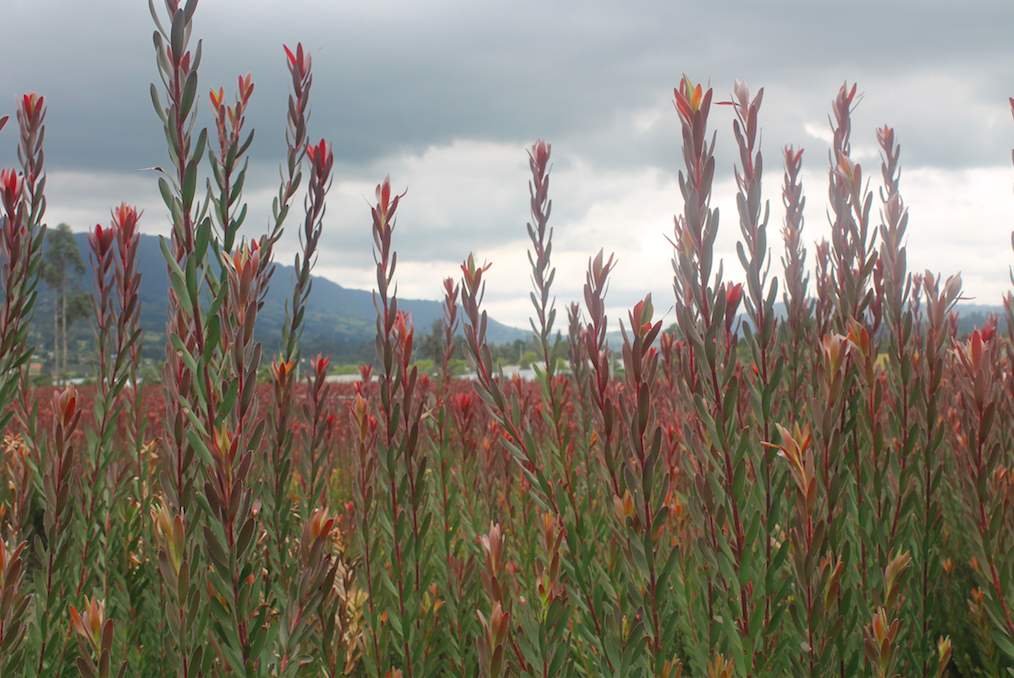 We are visiting Rosamina. The name is the only thing left to remind us of the fact that the Perez family used to grow roses, for thirty years. We are surrounded by fields filled with leucadendron. Some varieties can reach a height of two metres. The farm is located in the hills. The 3-ha nursery that Perez started with, a few kilometres further on, has hugely expanded. By the end of this year, they’ll have a total of 42 hectares, says Perez.

“When we started, there was no market for our flowers”, according to Perez. He flew to the Netherlands to visit a trade fair. That’s when they began selling to the Netherlands. OZ Import is an important customer. Means of transport for flowers to Netherlands? Sea cargo. They gradually expanded their distribution channels.

Nowadays, their most important markets for protea and leucadendron are the United States and the Netherlands. Rosamina has a sales office in Miami. And they’re represented in the Netherlands as well. Their main competitors are based in Ecuador, South Africa, Peru and Central America. 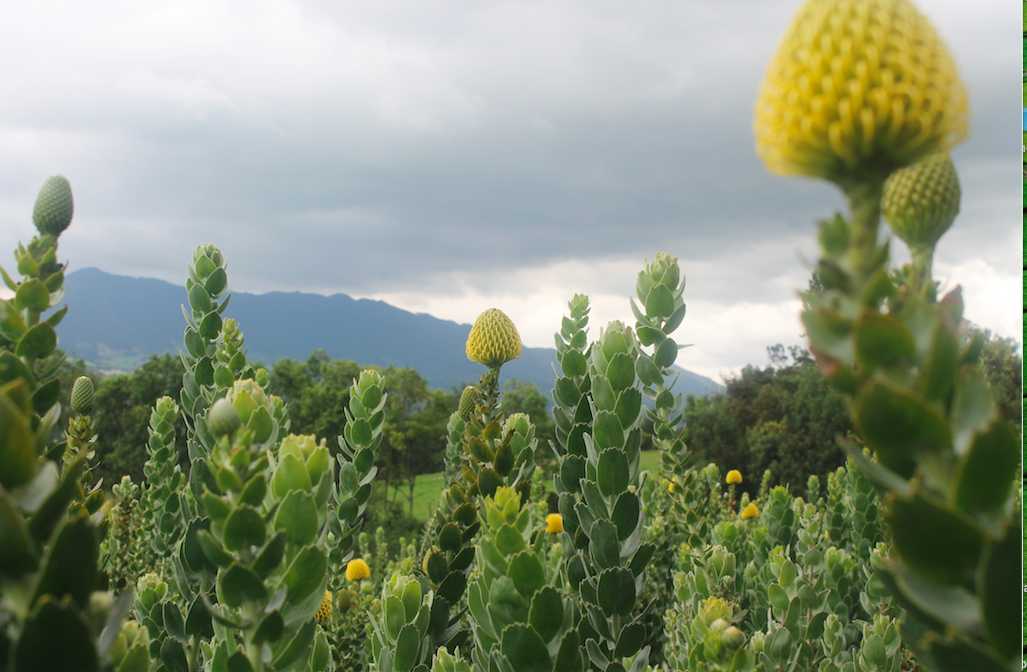 Perez makes bouquets too, for which he uses flowers from other growers as well as the eucalyptus and pink cushions that he grows himself. He tries to sell his flowers in advance. But that isn’t easy. Outdoor cultivation makes it difficult to plan ahead. Biggest concern? Hailstones.

We see how the harvested flowers are brought to the central processing hall. It’s a new building. There are buckets filled with different varieties of protea. Perez explains the difference between single and multi-branched leucadendron. A little later, the workers start their gymnastics. They do stretching exercises in order to prevent injuries from the repetitive work they do all day. Perez looks after the people in his company – 60% of which are women – and in the area around his farm. “Without people, we’d be nowhere”, he says. “We take care of the people. We offer training. We teach them how to read, for example.” 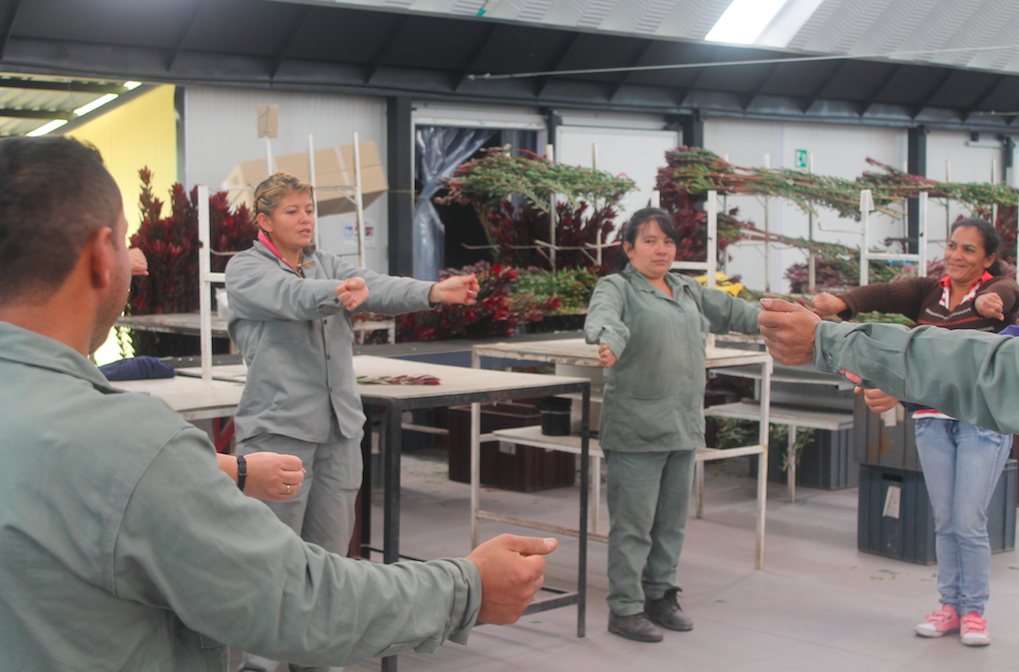 It’s very important to Perez that employees stay with the company. He’s noticed that there’s more and more competition from companies that are moving away from the ever expanding capital city. People are leaving the farms to go and work in the factories. But the turnover at Perez’ nursery isn’t large. “Treating your workers fairly does really help. Attracting qualified people is a challenge, though.”

Rosamina is Rainforest Alliance certified. This label focuses on the conservation of the rainforest in particular. Certain pesticides are prohibited. “However”, says Perez, “I don’t just work for the rainforest, but especially for the farm, for the people.”

Before we sit down for a big lunch, we’re treated to a concert by a children’s orchestra. The girl musicians are from the Santa Maria Foundation, an organisation that supports abandoned, orphaned and underprivileged girls. The foundation’s objective is to help the little girls become well developed, educated women with high self-esteem and values. The concert was organised by Asocolflores. Rosamina supports a foundation in Bogotá, which helps people who are addicted to drugs, alcohol, food or who suffer from depression. 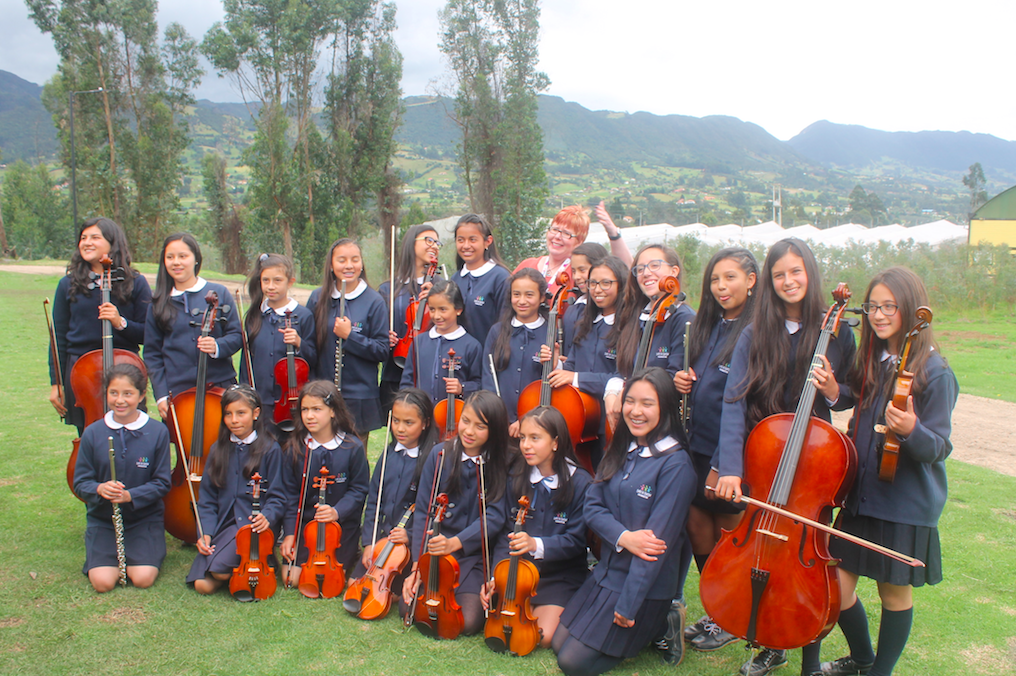 “I’m very happy with how the farm is doing”, Perez finalised. “Not just because we’re making money, but because we’re helping people make a better living. And it’s my team that deserves full credit for it.”