Drones can pollinate blossoms of fruit trees much faster than bees can do. Within an hour, a drone manages to pollinate a larger area what it might take bees two weeks to accomplish, according to the use of drones for the pollination of almond and cherry blossoms. In the meantime, drones are also being used in other fruit, reports the Nederlandse Fruittelers Organisatie (NFO). In the American state of New York, a drone was used for the first time in May to pollinate apple blossoms.

Except that drones can pollinate blossoms much faster than bees can, they have another advantage. They would also be effective under cold conditions, when bees don’t fly.

On the New York test plot, a so-called hexacopter flew for spreading pollen in an expanded pattern back and forth across the rows of apple trees at a height of about 2.5 meters above the crop. The aim of the experiment was to investigate whether this form of pollination leads to higher production and quality. The pollination drone is developed by the start-up company Dropcopter. De test location was at Beak & Skiff Apple Orchards in LaFayette (NY). 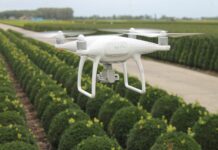