After some recent, heavy investments in his farm, Colombian hydrangea grower Jaime Ruiz of Groflowers says he’s now ready to export to Europe. He’s been trying to match the quality of the Dutch cut hydrangeas.

Ruiz explained that most hydrangea growers in Colombia are low-skilled. We met him at Proflora in Bogotá, Colombia. Most growers grow outdoors. They don’t have a huge number of plants – usually around 3,000 to 5,000 – and they tend to have trouble achieving the same, high quality all the time. Ruiz referred to them as not very professional. Many of the hydrangea growers are not Asocolflores members for example. And they don’t manage their own exports. 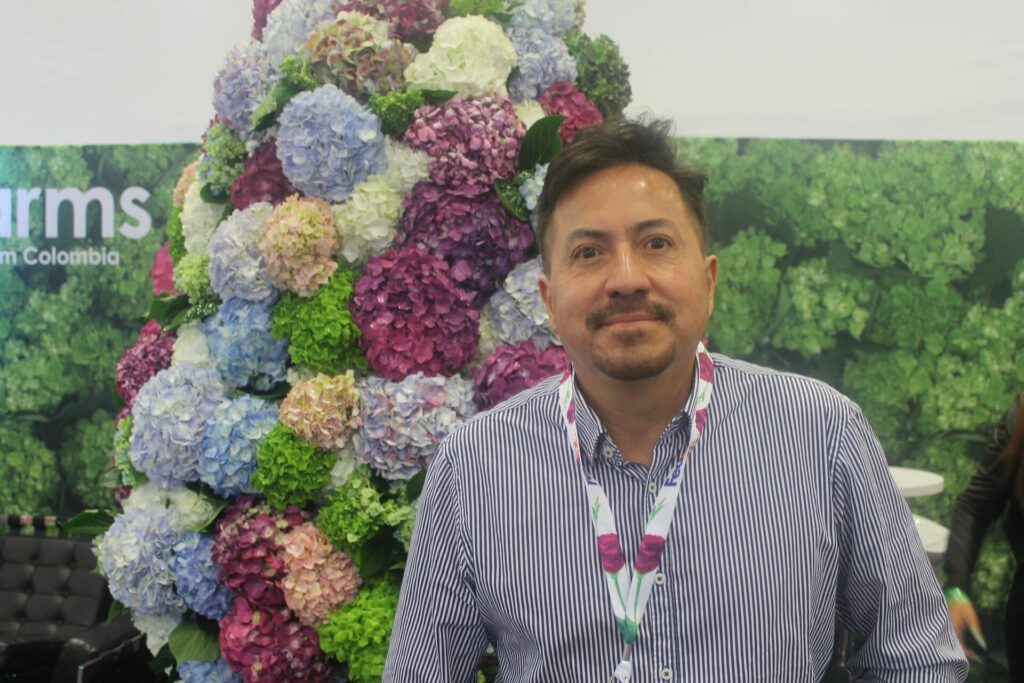 Most of the Colombian hydrangeas are for the American market. Ruiz is quick to point out that that doesn’t imply that everything on the American market is of low quality. But it is a price market, of course. Ruiz decided five years ago to start focusing on quality. He visited FloraHolland, as well as some growers in the Netherlands, and learned from them.

He purchased some land and bought new varieties. Because the hydrangeas that go to the USA, are different from the ones for the European market. He now grows his hydrangeas in greenhouses and uses many of the techniques that he saw in the Netherlands. He mentions for example the use of a fogging system, ventilators and irrigation tubes. He tries to limit the usage of pesticides as much as possible. The advantage of growing in greenhouses, is that it’s easier to control the soil pH, which is important for the colours.

Ruiz currently has 40,000 plants at his 5-ha farm in Medellin. He said he’s ready to export his flowers to Europe. He’ll have enough volume to take that step in the coming year. He mentioned that alternative destinations for his flowers might be the high-end markets of China, Japan and South Korea.

Ruiz always takes part in competitions at trade shows, to get an idea of how his products compare with those of his colleagues. Some of the awards he has received are listed on his business card: 2013 winner at SAF and Proflora and 2013 plus 2014 winner at Agriflor. He received more awards in 2015. He was competing with ten different flowers at Proflora 2017, including five varieties of small-flowered hydrangea. He grows the latter for the American market.

But even the Colombian floricultural industry isn’t completely without its challenges. The free trade agreements present Colombian growers with very strict requirements regarding social and environmental aspects. They must adhere to all the international standards. Furthermore, the government recently increased the income taxes. And more and more construction companies appear close to the farms. As a result, labour costs are going up. But all in all, Ruiz is pretty happy with his business.