The last edition of the International Green Expo has shown a clear improvement in quality, in the figures and in the flow of visitors. It has shown a growth in innovation and offer, business opportunities and creativity, meetings and contact opportunities. The International Green Expo has started working on the fourth edition which. The third hall, which means a further 15,000 sqm of exhibiting space, is a possibility.

The rumors about the opening of a third exhibiting hall in 2018 that started circulating hours after the end of the third edition are confirmed by the management of the most important trade fair for horticulture, garden and landscape in Italy.

The organization affirms that this hypothesis might be among the innovations in the next edition. “We have other priorities – the management states – such as the further development of the invitation channels of foreign visitors, the widening and deepening of Italian ones, the refinement of certain exhibiting sectors that have great potential. The third hall, which means a further 15,000 sqm of exhibiting space, is a possibility. It depends on a variety of (positive) factors. It is indeed true – the management concludes – that during the last edition we had to turn down some applications because there was no more space left. Anyway, we’ll be careful.”

In the background, there is an event that has not only brought life back into the trade fair world, but that is also a drive for the culture around the sector on a professional, creative and design level. The International Green Expo has brought the green sector at the center of debates after years of silence. It has created connections between horticulture, agronomy, creativity, design and the market.

It has started top-level formative and informative initiatives on various themes, not to mention a competition for the planning of a green space – Dynamic Gardens – that has already moved its first steps. The first mappings with arch. Umberto Andolfato from AIAPP have already been done. The initiatives involved floricultural districts, included prizes for the most important innovations in the sector on an international level, and the participation of a TV show. All these factors have contributed to the presence of 110 official international buyer delegations and a 12% of foreign visitors.

In April, Myplant & Garden has planned a very successful green event during the Fuori Salone week in Milan. It attracted public, designers, sponsors and potential new exhibitors by creating the only setting dedicated to outdoor furniture and living (dOT – Design Outdoor Taste event, 800 sqm in the heart of the Brera District).

The Summer season will bring partnership programs with other events and the organization of roadshows in Italy and abroad.

Among the main sectors of interest selected by the visitors of Myplant 2017, the nurseries took the lead. Visitors themselves well represented the world of gardeners, wholesalers and producers.

“The profiling of our visitors allows us to say that more than 50% came from sales channels (retailers, garden centers, agents …) and from the horticulture production. If we put them side by side to wholesalers, import/export operators, buyers from the chains and those invited from the management, we find out that Myplant has attracted more than a potential immediate buyer every two visitors, whereas the rest of visitors was represented by potential buyers such as maintenance operators, gardeners, nurserymen, architects, companies, agents from hotel and touristic chains, professionals and service companies). All of this means that the International Green Expo has gathered in Milan the most important actors in the horticulture, garden and landscape sectors in Italy. This is what both exhibitors and professionals ask for, this is what the whole sector – our primary customer – asks for.” 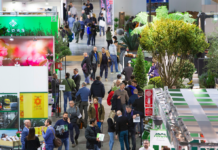 Italy: the gardening market is growing

Sales via FloraHolland increased after the summer holidays