By the end of June Poland was in the top-5 of export destination countries for plants and flowers for the first time. According to VGB, “That market still offers great potential for Dutch plants and flowers.” On the other hand, exports to France and England were disappointing during the first half of this year.

Poland’s 27% growth until June meant that it overtook Belgium in the ranking list of export destinations, putting Poland in fifth place. “Their economy is growing as expected, by 4%, unemployment is going down and consumer confidence is strong. The Polish market still offers plenty of potential for Dutch plants and flowers”, says Martijn Homan, Dutch Counsellor for Agriculture, Nature and Food Quality in Warsaw.

“Perhaps organisations such as the Flower Council of Holland should reconsider the focus of their promotional activities and give more attention to the growing markets in Eastern Europe?” he wonders.

Decrease in sales to France

In addition to the lower sales value to England because of the devaluation of the British pound, June’s plant and flower exports to France were disappointing, too: -9%. As a result, this number three export country’s lead went down from 3% to 1%. Sales around the French Mother’s Day, at the end of May, weren’t great, especially in the large cities.

“And elections always cause unrest, leading to lower consumer confidence”, explains Jos Beckers of Joflex, who specialises in France as a flying Dutchman. However, René Welboren of FleuraMetz concludes that “Our branches in France reached the same turnover during the first six months as last year, which was in accordance with our objective.”

Warm weather throughout Europe is the major cause for the lower export turnover of flowers in June according to Ron Bos of Hilverda De Boer. Wesley van den Berg of Floridata: “The export figures clearly showed a warm weather line. In colder areas, like Northern Europe, exports were more stable.”

The total Dutch export of plants and flowers increased during the first half of this year by 6.5%, reaching a total of € 3.4 billion. The export value for June was similar to that of last year. “The warm weather in many parts of Europe brought sales down”, according to Floridata, which collects the export figures.

On an annual basis, flowers (+8%) are still doing slightly better than plants (+5%).

The past quarter was the thirteenth consecutive quarter during which the value of Dutch plant and flower exports increased. The turnover of the past quarter is almost the highest ever, with a total of € 1.8 billion. Increasing demand, higher purchasing prices, as well as strong marketing and logistics of both importing and exporting wholesalers form the basis of this growth.

According to Bos, the total growth of the first half year is because of the fact that special flower days fell on favourable days and because of higher purchasing prices and the improved economic situation in most distribution countries. “Our expectations for the second half of this year are positive, too.”

Dutch exporters base their confidence in further growth during the second half of this year on more stable exchange rates, too. “With a broad assortment from all over the world and a strong logistics service, they can supply each country on a daily basis”, says Van den Berg. 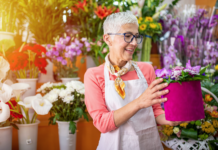