The Dutch government is sending a negative message to air cargo carriers with his plans for a national aviation tax from 1 January 2021, which will also affect full freighters transporting flowers. This is the opinion of Coen Meijeraan, Public Affairs Manager at Royal FloraHolland. “The government basically says: ‘Full freighters, we don’t want you here’. It’s a message that’s highly undesirable. Especially since the shortage of slots has already been forcing carriers to swap Schiphol for foreign airports like Liège, Brussels, Luxembourg and Frankfurt lately. All in all, they’re creating a negative atmosphere.”

Last week, the Dutch government announced they want to introduce an aviation tax by 1 January 2021, not only for passenger flights, but for cargo flights as well. Departing cargo planes producing relatively little noise will be paying €1.925 per ton of maximum takeoff weight. The rate for the noisiest aircrafts will be €3.85 per ton. That’s what Menno Snel, State Secretary for Finance, wrote in a letter to the House of Representatives.

Cargo transported in the belly of passenger planes won’t be taxed separately. According to Snel, that would be too complicated. The aviation tax will only apply to aircrafts departing the Netherlands. That means that full freighters transporting import flowers to Schiphol, won’t have to pay the tax. And if you’d calculate the rate per stem, it’s close to zero anyway. “You’d be looking at around 0.01 cent per stem”, according to Meijeraan.

Sustainable alternatives not stimulated
It seems like the aviation tax will have hardly any consequences at all for the international flower trade. But don’t underestimate the impact, warns Meijeraan. What worries him, isn’t so much the actual tax, but the message it sends to the air cargo sector. “It also seems that the measure is mostly intended to benefit the state’s finances. The money that’s collected won’t be used to finance sustainable alternatives. It is said that taxes are needed to make air transport more sustainable. But the government doesn’t stimulate sustainable alternatives. Take for example all the flowers that are flown from Africa to Schiphol at the moment. Ocean freight might be a suitable alternative, but the government doesn’t provide any extra funding to develop this.” 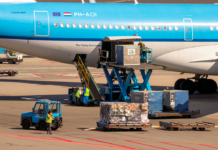 ‘An entire flower auction is linked to airfreight sector 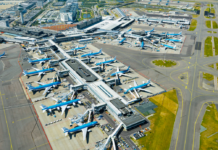 Why Royal FloraHolland is not pleased about aviation tax?

Schiphol is full: the Netherlands as a hub at risk