The airfreight sector at Schiphol is fighting for survival. Capacity problems, climate change and environmental legislation are all putting pressure on the sector. Indirectly, this affects the flower auction too. Because it’s partly thanks to the flowers flown in from Africa that the Netherlands can call itself the number-one hub in the international flower trade. But can this position be maintained? Nieuwsblad Transport held a conference about airfreight at 28 November.

‘Flower Auction’ was a point listed underneath the heading ‘Forward Effects’ on one of the slides presented by Floris de Haan, senior researcher in aviation economics with the Erasmus University in Rotterdam. Just like last year, he presented the airfreight monitor at the Nieuwsblad Transport airfreight conference. The study indicated that airfreight is of great importance for the Dutch economy and for Schiphol. In 2018, the airfreight sector had an added value of more than €2.5 billion. This figure didn’t include the flower auction, explained De Haan, because forward effects are difficult to measure. 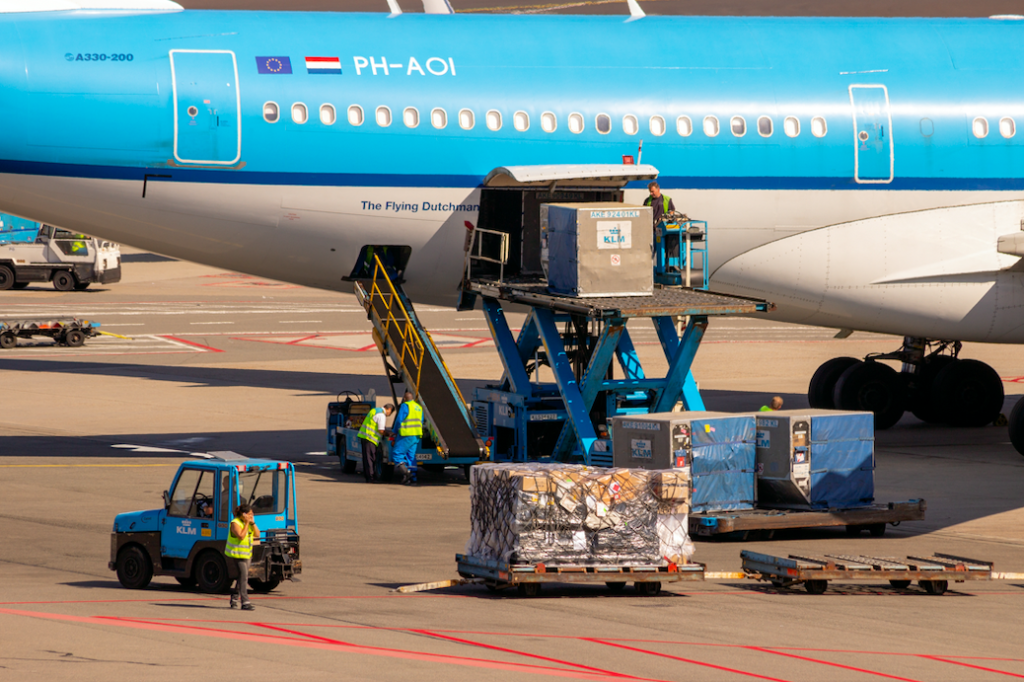 But that Schiphol is important for the flower sector, and the other way around, is a fact. In terms of volume, flowers are the largest product group that’s transported to Amsterdam in full freighters. Not all of these flowers end up at the auction. Many products from African and South American growers are directly forwarded to European customers, but still land at Schiphol first. A third of all incoming air cargo at Schiphol consists of flowers. In recent years, however, the airfreight sector has been under pressure.

One of the main reasons for this is the limited number of slots available for cargo flights.  The number of flight movements (take-offs and landings) at Schiphol has been pushing against the limit of 500,000 since the summer of 2017. The situation has led to stricter rules with regards to the distribution of slots (times during which take-offs and landings must take place).

Airlines must stick to the agreed times for at least 80% of the time, or they lose slots. As it’s generally difficult for airfreight companies to fly on time, their number of slots at Schiphol has been going down during the past few years. The introduction of Local Rule 2 last August, somewhat softened the blow – 25% of unused slots were given to the airfreight sector at that time.

But all in all, the stricter slot distribution has had its impact on the airfreight sector. The airfreight monitor indicated that the number of cargo flights decreased from 17,796 in 2017 to 16,002 in 2018, while the airfreight market in its entirety grew during that same period.

The number of flights to and from Schiphol went down due to a shortage of slots. The total volume decreased as well. Interestingly though, the added value of airfreight increased from €2.15 to €2.54 billion. De Haan couldn’t confirm whether this was because the freight that had landed at a different airport was subsequently driven to Schiphol. It is likely that that was the case, though. In 2019, the airfreight sector saw a further decline, due to a shortage of slots and a faltering economy.

That’s why Schiphol Group came up with the plan for a freight pool. The idea of the pool is that a fixed number of slots is reserved for airfreight. The sector would then get at least 3.5% to 4% of the total number of slots. Politicians Remco Dijkstra (VVD) and Cem Laçin (SP), both attending the conference, expressed they’re in favour of the freight pool. Dijkstra: “We’ve seen a decrease in cargo flights, we’re losing market share and jobs. I don’t want that. It’s undesirable. There’s an entire flower auction linked to this.”

“If you aren’t mentioned in the Memorandum, you don’t exist”, was the general feeling at the airfreight conference in Hoofddorp. One attendant, who works for an American freight forwarder, said he’s been trying to explain the Dutch policy to his employer for 40 years. He called it ad-hoc policy. KLM, Schiphol, Evofenedex, plus some other parties with shared viewpoints have been discussing the Aviation Policy Memorandum with politicians.

VVD politician Van Nieuwenhuizen seems to be aware of the importance of the airfreight sector. She asked research institute SEO to conduct an independent study into the importance of airfreight. One of the conclusions was that a balanced and sustainable development of both cargo and passenger flights is crucial for Schiphol’s contribution to Dutch wealth.

On the 19th of November, following the study, she wrote in a letter to the House of Representatives how the airfreight sector contributes relatively much to the Dutch economy and wealth. “At the same time, I have noted that in 2018 and 2019 (up until September), the number of cargo flights has gone down by 10% and 13% respectively, and that cargo flights have been diverted to other airports, such as Brussels and Liège.”

Incidentally, the total cargo volume hasn’t decreased accordingly, because full freighters transported more cargo during this period and more goods were transported in the bellies of passenger planes as well. Cargo from diverted flights is currently driven to Amsterdam by lorry. Would that change, if Schiphol lost its pivotal role in the airfreight sector? And how would that affect Royal FloraHolland’s current hub function? It’s one of the uncertainties arising from the pressure on the airfreight sector.

Limited capacity and shortage of slots for cargo flights aren’t the only threats for the airfreight sector. Not all politicians agree about Schiphol’s future. In addition to the limited number of slots, Schiphol is also facing climate regulations and nitrogen limits. Laçin warned that the airfreight sector must provide added value with regards to sustainability and permanent employment. “Otherwise, airfreight might become a matter of controversy.”

Flowers are a luxury article, after all. If all the flowers that are flown across the globe were to get on the radar of climate and environmental activists, the consequences for the flower trade could be very negative.

Unlike his colleague Dijkstra, Laçin isn’t in favour of further growth for Schiphol. “Do we really need all those daily flights to nearby destinations? Wouldn’t it be better to take the train to Munich, Frankfurt and Berlin? That would free up space for more important flights. KLM will have to grow within the current limits, or they’ll hear from Aalsmeer.” With that last comment, he highlighted another problem for the aviation sector; some local residents experience nuisance due to noise and emissions.

A final topic of discussion was the freight tax, which the Dutch government wants to impose on cargo flights from 2021. Dijkstra said the government agreement is often keeping him awake at night. “Is this really necessary?” In any case, he argued that the tax should flow back to the freight sector and used to make it more sustainable. “And I do hope that all EU countries will introduce the same tax in that case, because if it was just the Netherlands, that would make us the losers.”