For more than 10 years, Belgian grower Raf Rombouts has been combining the cultivation of amaryllis with that of redcurrant. And as if that wasn’t enough, he decided to throw grapevines into the mix earlier this year. Rombouts already knows that the combination of amaryllis and redcurrant works well. And he isn’t afraid that the grapevines are going to distract his attention from the other two crops.

Raf and Ben Rombouts took over the Romberama nursery in Loenhout from their parents in 2006. Not in the traditional way, they didn’t join the business when they were young. Even so, father Bert and mother Mai are still a source of great support. Ben is managing a pick-your-own garden nowadays. From 2017, Raf has been running the nursery by himself, because the brothers had developed different views that were no longer compatible.

The brothers started with some hefty investments when they took over the nursery. The company was immediately expanded from 0.45 to 1.2 ha. In 2010/2011, they expanded again, to a total of 1.5 ha. They also decided to abolish soil-grown crops altogether, due to the problems with nematodes. Romberama was one of the first to start with non-soil-grown crops. Father Bert was already steam cleaning the rockwool slabs of his pepper crops to use them to plant amaryllis bulbs as early as 1986. Later on, they switched to steam cleaned Agrofoam. 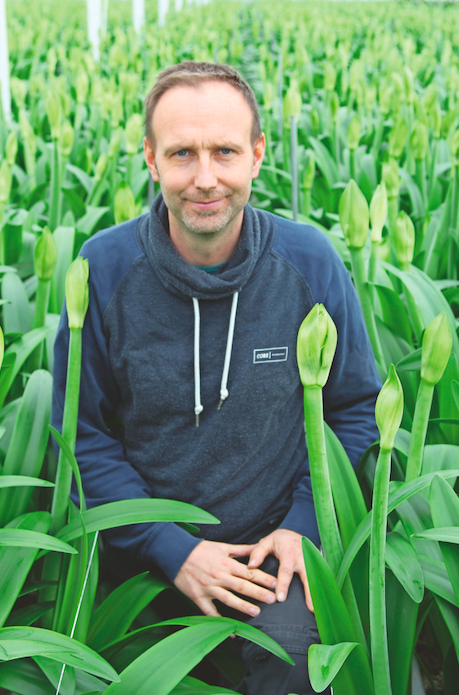 A third of the entire acreage is cleared at the end of November each year, when the plants in those sections end their two-month blooming period. The substrate is steam cleaned and treated with beneficial fungi. “Harmful fungi can’t grow where beneficial fungi live”, is Rombouts’ reasoning. New bulbs are planted in those sections from January until mid-February. It is crucial that the bulbs are dried properly, to enable effective hot water treatment against bulb mite.

The biennial plants are harvested in November/December. The growing season for young plants is extended as much as possible. The main harvest time is December, but it can extend until mid-March.

Two thirds of Romberama’s amaryllises are white, 25% are red and 15% are salmon and fuchsia pink. Rombouts has a small percentage of discards every year, but he isn’t replacing those with new varieties for now. More than half of his white varieties are Mont Blanc. If a good alternative came to the market, with more stems per bulb, Rombouts would be the first to buy it.

To see how the bulb has developed, and whether it’s been a good growing season, you’ve got to wait until harvest time. The plants’ stress levels can be measured via infrared cameras. Rombouts would like to have this information at an earlier stage, so that he can improve his quality even further. That’s why he’s working together with Ghent University – they’ve recently placed plant sensors and tensiometers among the crops. Measurements based on sap streams are unfortunately not an option, because that would damage the bulbs.

The results so far haven’t been 100% positive, according to the Belgian grower. The study will be continued in a test garden and Rombouts is staying closely involved.

In addition to using beneficial fungi, Rombouts tries to grow in an integrated manner as much as possible. With pests such as mealybug and bulb mite, he sometimes has no other choice but to use pesticides, though. The problems with fusarium made the Belgian amaryllis grower decide earlier this year to start propagating their own bulbs.

Another new process introduced by Rombouts is the fermentation of leaf litter. The litter is converted into a compost called bokashi, which Rombouts uses to improve the soil of his grapevines. The higher carbon content enhances the soil life.

At the end of the season, most amaryllis growers remove the support mesh and stakes, and then have the crops shredded by an agricultural contractor. But Rombouts does his own clearing with the help of a leaf cutting machine that he developed himself. The machine lifts the support mesh, which is then rolled up, while the leaves are shredded. The stakes are collected by an employee on the machine.

The brothers initially just took over the amaryllis cultivation from their parents, while father Bert continued to manage the small-scale redcurrant cultivation in a 0.5-ha greenhouse. Once the brothers felt confident about the amaryllis cultivation, they decided to include redcurrant in their cultivation plan as well. The main idea behind this was that it would enable them to keep their employees busy for a longer period. They can currently employ eight full-time workers all year round, apart from 1.5 months during the summer months. During the peak periods, seasonal workers bring the total number of employees to around 25.

“The activities related to redcurrant start at the end of February. Our early redcurrants from the greenhouse are always ready in the beginning of May. And that season usually ends for us by the beginning or middle of June. After that, around mid-August, the amaryllis cultivation starts with the preparation of the bulbs. That season runs roughly from October to March”, explained Rombouts. The two cultivation periods complement each other perfectly, so there’s never a clash.

And personally, he doesn’t mind a quieter period during the summer months. “I don’t mind working hard, but when the sun comes out, I’d like to enjoy it. So, it’s an advantage that work at the nursery slows down then.”