The jury stated: “What a beauty! The color and size of the flowers truly takes your breath away. Sincerity is an outstanding centerpiece for larger containers and really catches the eye in borders. Consumers will love the huge blooms that ensure a colour explosion for later summer flowering.”

This new Dahlia’s fully double flowers can reach a diameter of over 20 cm. Sincerity features a multitude of early blooms showcasing large pink and white bi-color flowers with just a touch of yellow at their centre. This newcomer is compact and well-branched, providing a well-shaped backdrop for the showy blooms. Displaying best in mid to late summer and early autumn, this Dahlia is a smart choice for landscaping and large planters, or to fill the first holes in perennial borders. Sincerity is an excellent garden performer with massive colour impact that will convince retail and consumers for many years to come. 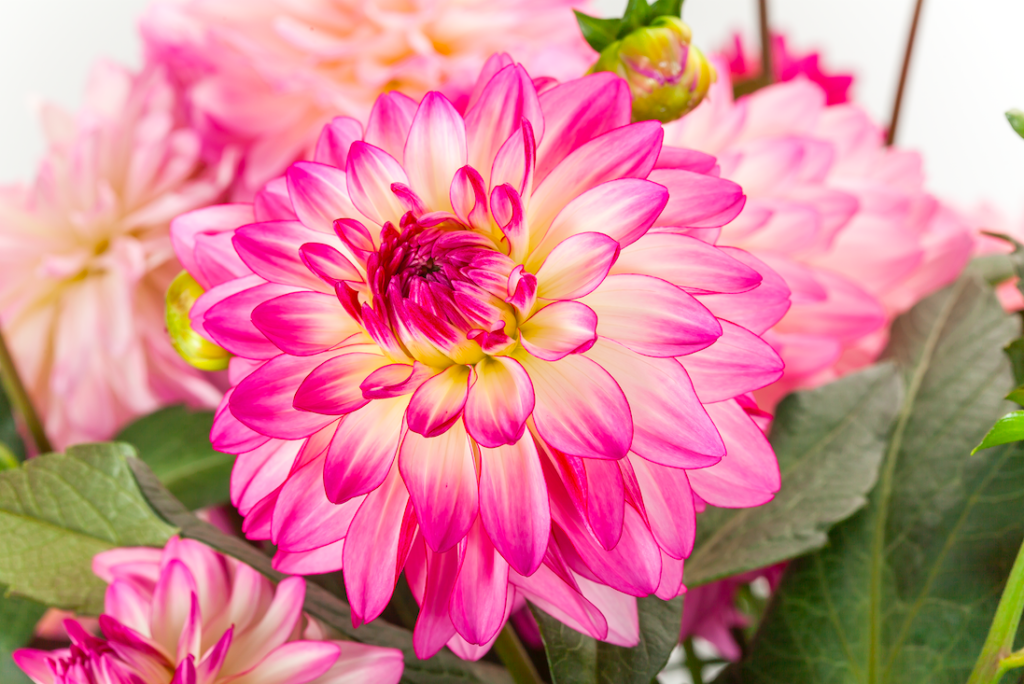 In line with the current COVID-19 regulations, this year’s FleuroStar winner was announced during a live event which could be viewed online. Two representatives of each participating company were invited to Floralis in Lisse for a ceremony with respect for social distancing. Over 100 persons followed the show via the live stream on the Fleuroselect website and Facebook. The recording of the show can be reviewed via both channels.

The new FleuroStar winner will receive considerable marketing back-up to turn its go-to-market strategy into a success. Contest organiser Fleuroselect will conduct a promotion campaign with international trade and social media and promote the new winner at trade fairs and industry events.

Also other industry players are offering support to FleuroStar. Waterdrinker, major Dutch wholesaler selling to international garden centers and florists, will offer premium product placement during 3-4 weeks at its Green Trade Center next season. Stokvis, the production house behind various Dutch gardening television programmes, will feature the new winner extensively in its star television show ‘de Grote Tuinverbouwing’. Pull Position, a marketing agency specialised in retail promotion, offers a tailor made marketing project whereas DeschPlantpak dedicates a lifestyle photo shoot and matching pot layout, made by their design studio, to the new winner.

In total, over 30 professionals in breeding, production, trade and retail evaluate each entry on point of sale attractiveness and commercial potential. Each jury member has seen the physical plants, either in person at the plant line-up at Takii or via one of the dedicated Zoom sessions.

Heike Gronemann, Chairman of FleuroStar Jury: “We are very proud of the fact that high-level players in the market such as Obi, Intratuin, Jardiland, Waterdrinker, Royal Lemkes, Van Dijk Flora and Royal FloraHolland are willing to assess our candidates. We are particularly honored that Tim Clapp from Kingfisher/B&Q and Eike Jöddicke from Hagebau have agreed to join our panel this year. FleuroStar’s success and credibility is due to the diversity and expertise of our jury.”

The FleuroStar Contest is held annually during the FlowerTrials week in June in the Netherlands and Germany. Fleuroselect members can enter their top breeding breakthrough of the season to become the new ‘Winner with the Wow Factor’. Due to the cancellation of the FlowerTrials, the Contest was held in a digital format this year.