The focus of Fleuramour, held in the Belgian town of Bilzen, was on the Urban Roots theme: bringing nature back into the cities. Flower arrangers from across the world shared their personal interpretation of this topic in the Alden Biesen castle grounds from the 21st until the 24th of September.

When artistic director Regine Motmans was asked about the choice of Urban Roots as a theme for Fleuramour 2018, she explained: “It allows for a wide range of ideas that are still connected. There’s more attention these days for the fact that urbanisation gets in the way of nature and green space and people don’t want to lose the green roots. I chose the theme because I want to get even more people aware of it and encourage them to help look after our planet. I also hoped it would attract more young people to Fleuramour. Nature and greenery are trendy, and our Urban Roots theme is completely in line with that.”

Urbanisation is still increasing worldwide, and these areas often don’t have much space for flowers and greenery. Urban Roots is all about bringing flowers and green space back into urban areas. It also fits in with the goals The Green City, a movement that incorporates initiatives from across the world.

Flower arrangers from many countries, including Mexico, the United States, Canada, Russia, Japan, China, Hong Kong, Australia and several European countries all expressed their own interpretation of the universal theme in their arrangements.

In the ‘centre courts’ – set in the castle’s church and courtyard – flowers and greenery fought a figurative battle with concrete, stone and other interior elements. Italian flower arranger Rudy Casati said that he and his team ensured ‘that nature would have a good fight with the arrogant and blind human beings in the church of Alden Biesen, in an attempt to restore the traditional balance between the two’. 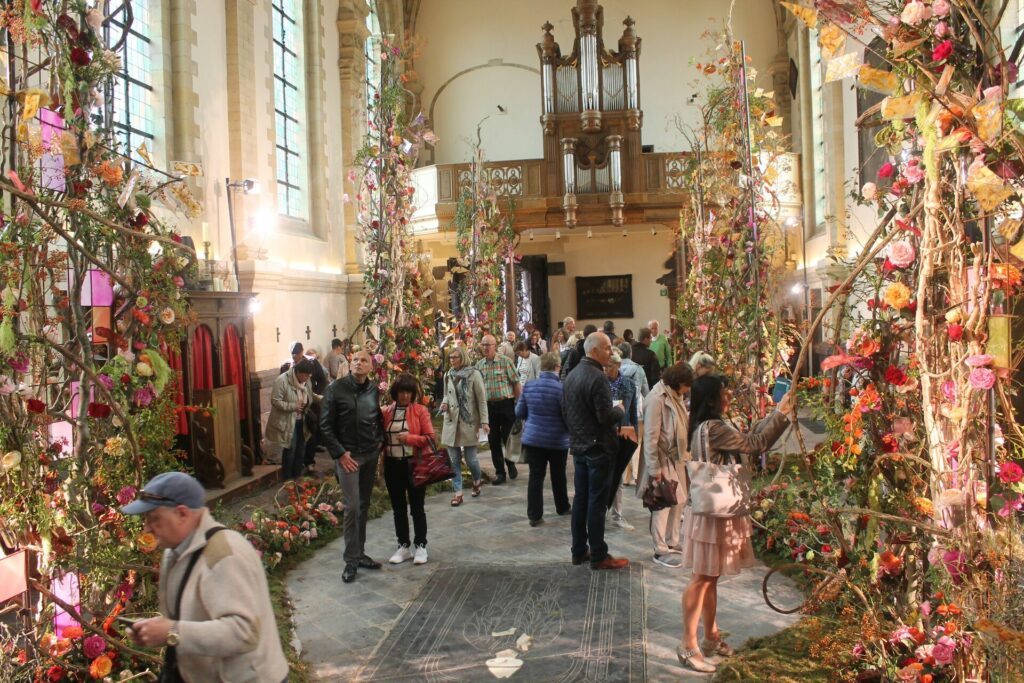 Belgian floral designer Tom de Houwer lifted some of the courtyard paving and created an image of roses bursting out of the cobblestones. The masses of gloriosa roses represented both the fire of destruction and the creation of a new beginning. 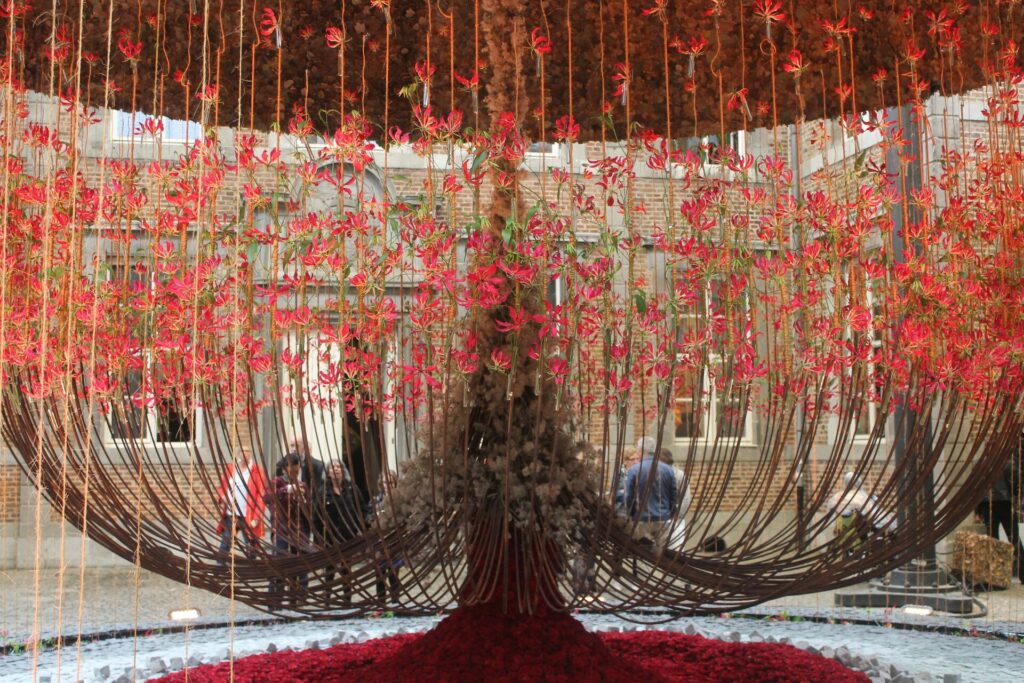 Other arrangers were less bombastic. Some of them tried to combine elements from nature and city. Kristel van Dijk and Roos van Unen for example, showed a design that included freesia and graffiti.

Others focused on the importance of people to connect. “As an individual, you can try to bring nature back to the city, but it’s difficult to do this all by yourself. People can achieve more when they join forces and work together”, said Belgian designer Els Geerdens.

Elena Kilchvskaya from Russia made a feature of the different communication tools that allow people to connect. In her work, she used flowers to refer to the countless number of wires that make it possible for people to communicate with each other across large distances and she called those wires the modern roots of city life. 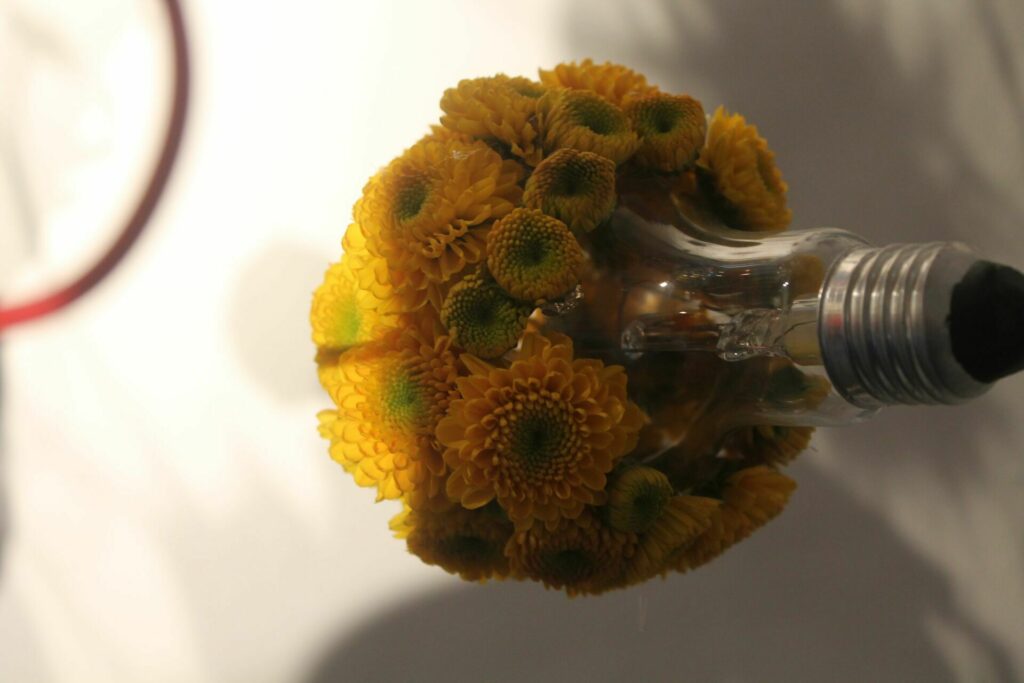 Another Belgian flower arranger, Charlotte Bartholomé, pointed out that we are constantly trying to control and tame nature by building more and more houses, streets and buildings, while it’s so important to listen and let nature take its course.

Another contribution that stood out, was American Julia Marie Schmitt’s Urban Frames. She didn’t present it as a warning for city life without green space and flowers, but it could be interpreted as such. 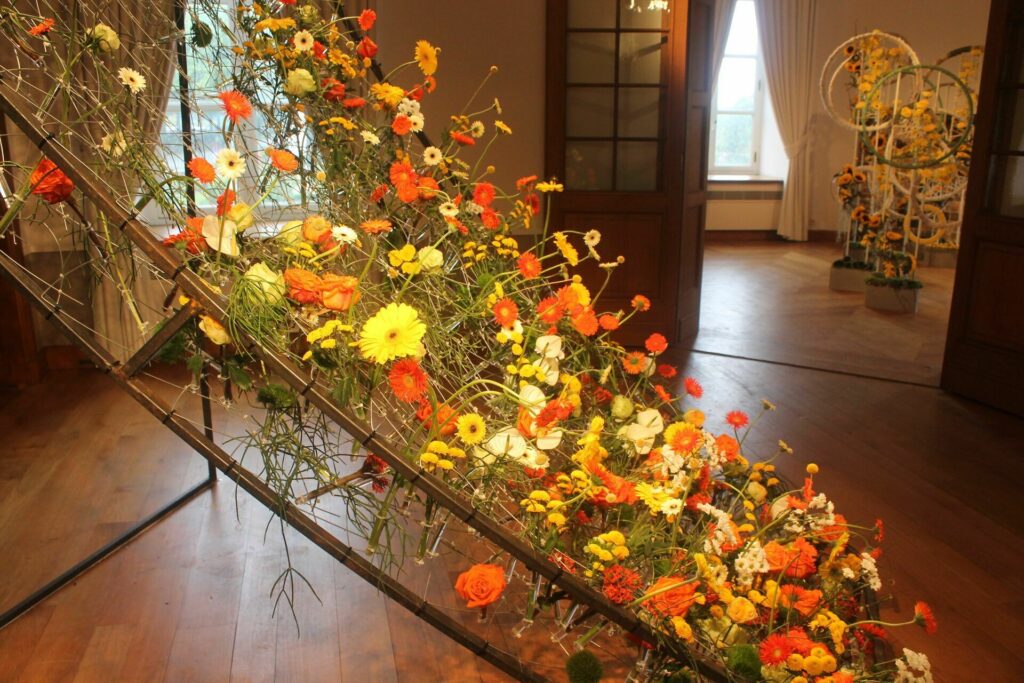 Schmitt: “When I was little, our schoolyard consisted of a car park surrounded by chains. The tarmac was our grass and the chains were the framework within which our childhood was shaped. We saw the world pass by, car by car, from our enclosed playground. It was our safe haven, where we played, made friends, fought with each other, learned life lessons and developed into the people we are today.”

A total of around 140,000 flowers was used at Alden Biesen. The main suppliers were, just like previous years, the Dutch growers, complemented by Ecuadorian and Belgian growers. Fleuramour is organised by the Belgian publisher of the Fleur Magazine and Fleur Creatief trade journals for florists and consumers throughout Europe.

Fleuramour provides Rekad with content for their journals, and it also serves as an opportunity to build customer loyalty. For growers and exporters, the event is an occasion to present themselves to florists from across Europe and beyond.

Fleuramour cancelled due to corona