Spanish rose nursery Aleia Roses is in a good place. After a difficult first production year in 2017, they have now started an upward trend when it comes to production, quality and turnover. They expect 2019 to be a profitable year.

Dirk Hogervorst, CEO at Aleia Roses since the beginning of 2018, describes the rose nursery as a start-up. In principle, he’s right: owner Luis Corella Arroquia might have been an experienced grower, but he gained his experience with an 80-ha greenhouse in Mexico, where he grew tomatoes on substrate. The transition to 14.3 ha of roses in Spain was a deliberate choice made with the help of Dutch fitters and knowledge centres. The ultra-modern greenhouse for the cultivation of Red Naomi! was finished in 2016. 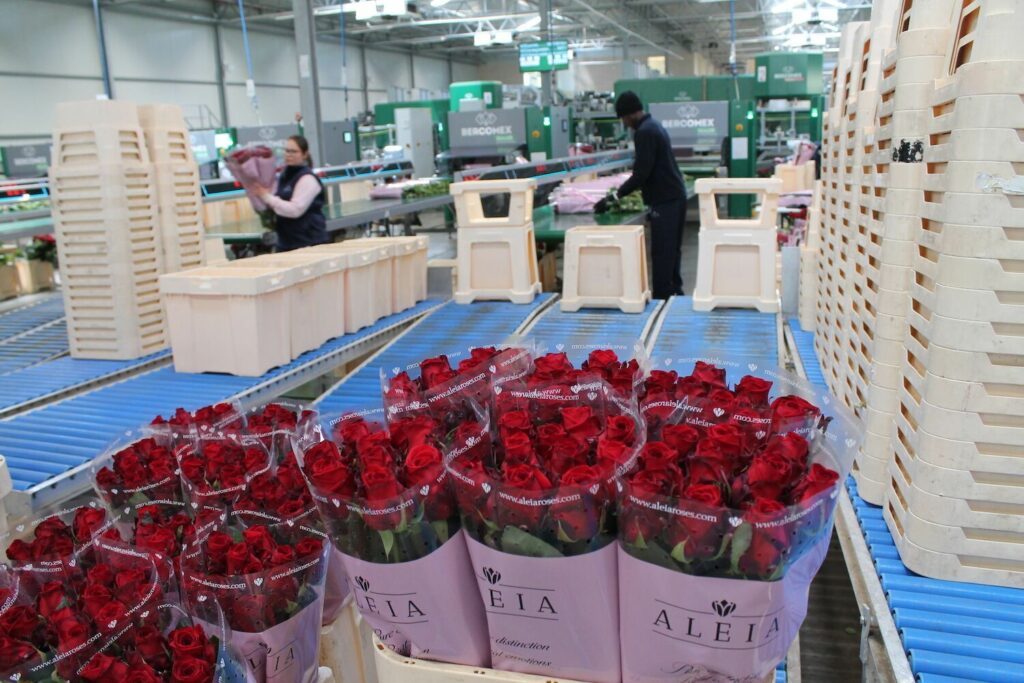 Hogervorst: “Basically, we’re a Dutch company under the Spanish sun. The first production year was difficult. We had to get used to the Spanish climate conditions. The Dutch management has a lot of experience, but most of the workers were new to the job and staff turnover was high in the beginning. And buyers were initially holding back, because they didn’t know who we were. All in all, the first year was difficult.”

But as Hogervorst explained to a group of international journalists in Spain last week, the company maintained its focus: producing the most beautiful and best-quality roses in a sustainable way. And they also continued to invest in marketing. Making a profit is usually not the most important goal during the first couple of years.

Hogervorst initially started with Aleia Roses as an adviser. They liked him for his knowledge of sales and of the market, which he had gained in several different management roles with Royal FloraHolland. After more than 25 years of service, he ended his career at the auction by the middle of 2015. The job in Spain appealed to him. “At a certain point, I was asked whether I wanted to lead all the company’s processes in the role of CEO. I seized the opportunity with both hands.”

Aleia Roses recently introduced the premium quality Aleia Maxima, which means that the company now has three brands: Reia, Aleia and Aleia Maxima. There’s no difference in vase life: with the correct treatment, they all last more than two weeks. Differentiation is based on eight other criteria, including bud size, maturity, stem length and stem thickness. Roses with the maximum score for all eight points are selected for the premium assortment.

Hogervorst knows from independent flowering tests that their Red Naomi! belongs to the cultivar’s top 3 when it comes to vase life/shelf life. They will continue to take part in these tests in the future.

The company produces around 40 million stems per year. 90% of their production is traded via Royal FloraHolland. Two to three truckloads of roses leave their premises each day, to be shipped to the Aleia Roses facility in Aalsmeer. Around 70% is sold through the auction clocks across all of Royal FloraHolland’s locations. Direct sales are currently growing.

With regards to price formation, the CEO is happy to share that, looking at mid-price per cultivar, the company has a place in the top-5 companies in the auction statistics. “We’re on the right track with our cultivation, production and distribution. Goodwill is important in the trade and that’s an aspect we’re working on. By the end of 2020, we should be connected to the biogas plant next to our company. That will provide us with sustainable heat, electricity and carbon dioxide.”