Drought, then deluge, is a pattern with a long history in California—one that is certain to get even more extreme in coming years. Flower farmers in the state are already using some of the most sophisticated water-management techniques in the world. They will need to keep raising the bar.

From 2011 to 2017, California suffered a record-breaking drought. The state’s flower farmers— who produce three-quarters of all the cut flowers grown in the U.S.—were among those challenged to scrutinize their water-management practices. Many are clustered along the central coast, where the effects of drought were especially severe.

Today—after a couple of winters so wet they brought flooding and mudslides to vulnerable areas—California is technically drought-free. But flower farmers are not letting up their guard. With climate change, scientists predict even bigger swings from wet to dry. Precipitation is less likely to be stored as snowpack, further straining water supplies in the dry years.

Fortunately, flower growers here are already well advanced in water-management technologies. State regulations on water use are among the strictest in the nation. Along with the high cost of water, they have provided strong incentives. And while some techniques have been borrowed from abroad, others have been developed in California.

You can read more about water management at Californian flower farms in the new digital magazine of Floribusiness. 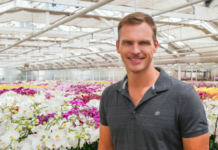 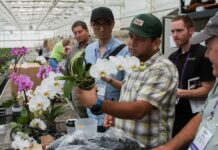