GreenTech 2019 was opened last Tuesday with a push on a red button. The 2019 edition attracted more exhibitors and novelties than previous years. The total number of 479 exhibitors was spread across four halls. The international horticultural fair, held in RAI Amsterdam, is still growing. Here’s an impression. 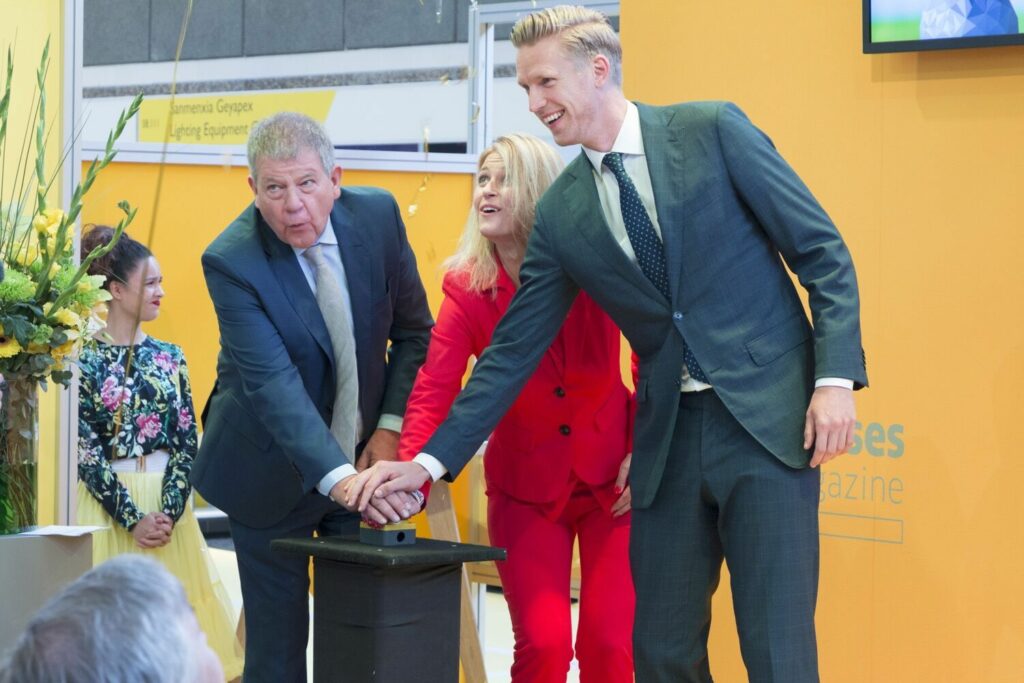 “95% of the decisions made by the European Union are made on the basis of emotions”, said Jan Huitema, farmer and member of the European Parliament for the Dutch VVD party, at the opening of GreenTech (picture on the right). “Legislation doesn’t leave enough room for innovative ideas and pilots.” His biggest frustration is that legislation always focuses on one point, which means that other points are left behind. “We need a more holistic approach. And Brussels should set more targets and introduce fewer measures.” 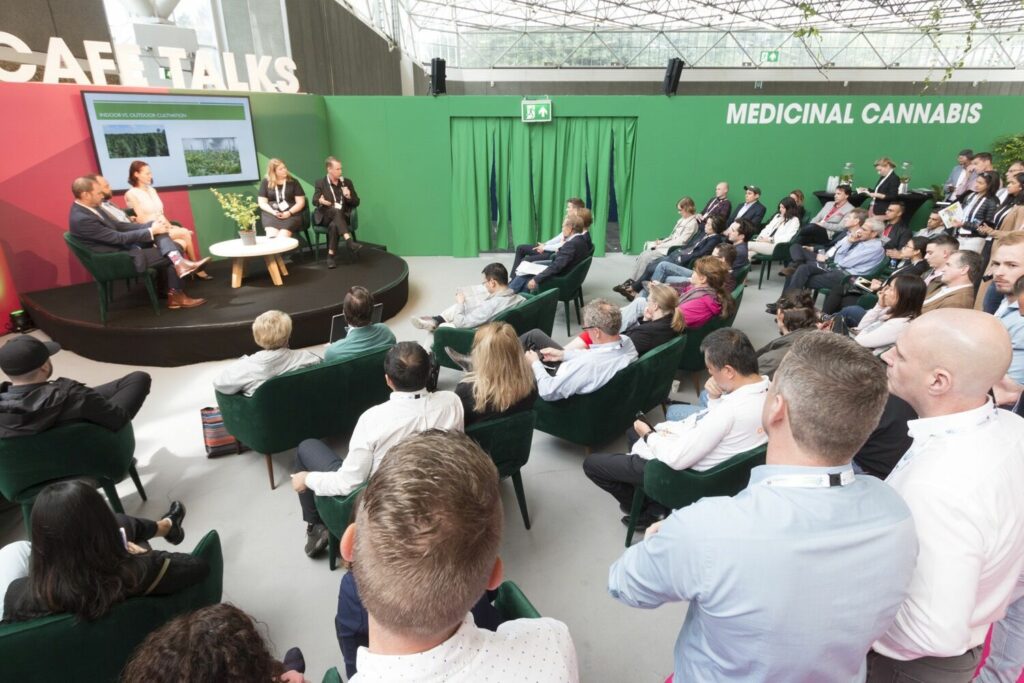 There was a strong focus on cannabis at the fair, including a Medical Cannabis Pavilion. The talks about this topic were well attended. 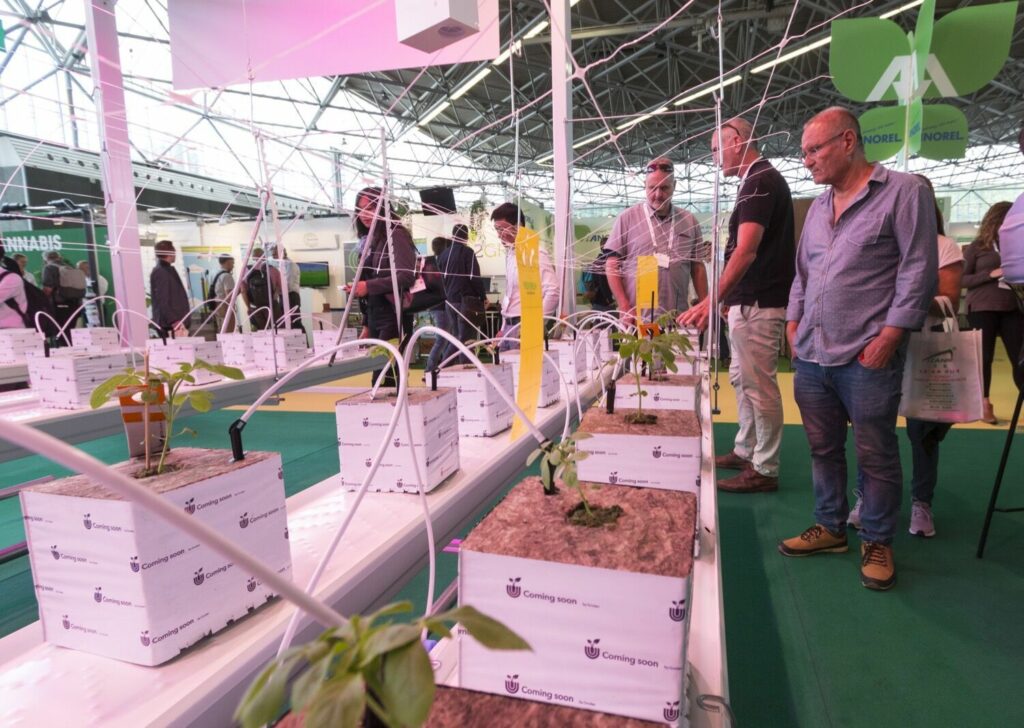 A consortium, which included Hoogendoorn, showed a cultivation system for cannabis plants. Greenhouse builder Gakon also set up a new branch for this particular market. 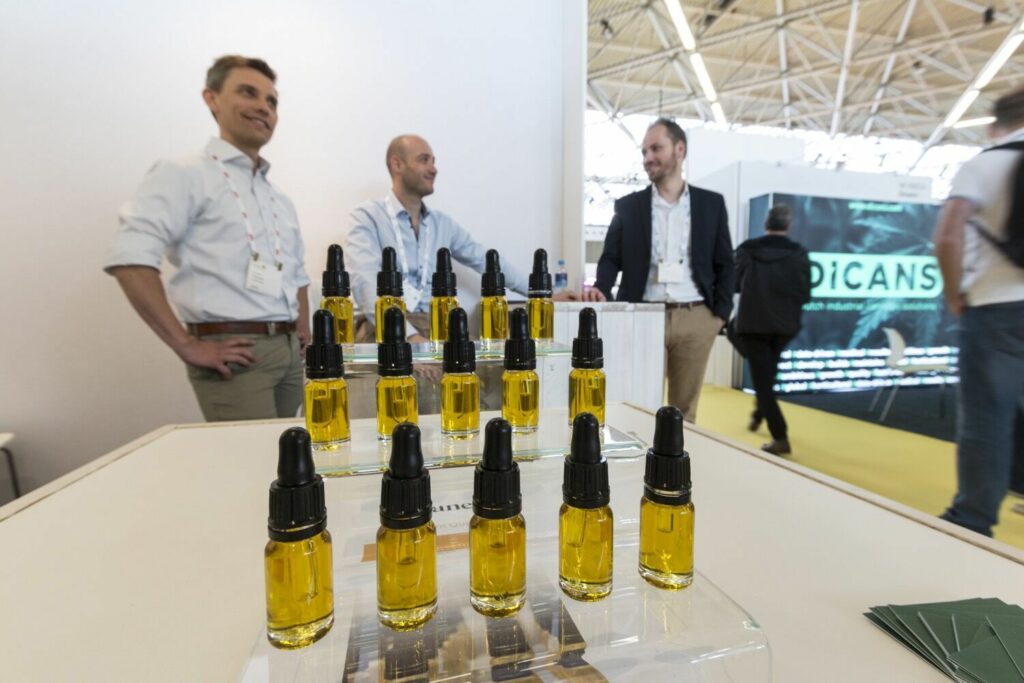 In Canada, the process of legalising cannabis cultivation is almost completed, both for medicinal and recreational use. In the USA, things are going in the same direction, state by state. In the EU, the situation varies from one country to the next. “There’s hardly any overarching legislation within the EU, which means that countries can determine their own course”, explained Jurien Koster, business developer at Phytonext (picture on the right). One of the specialist areas of his company is the production of extracts for medicinal cannabis, for which it has an opium dispensation. 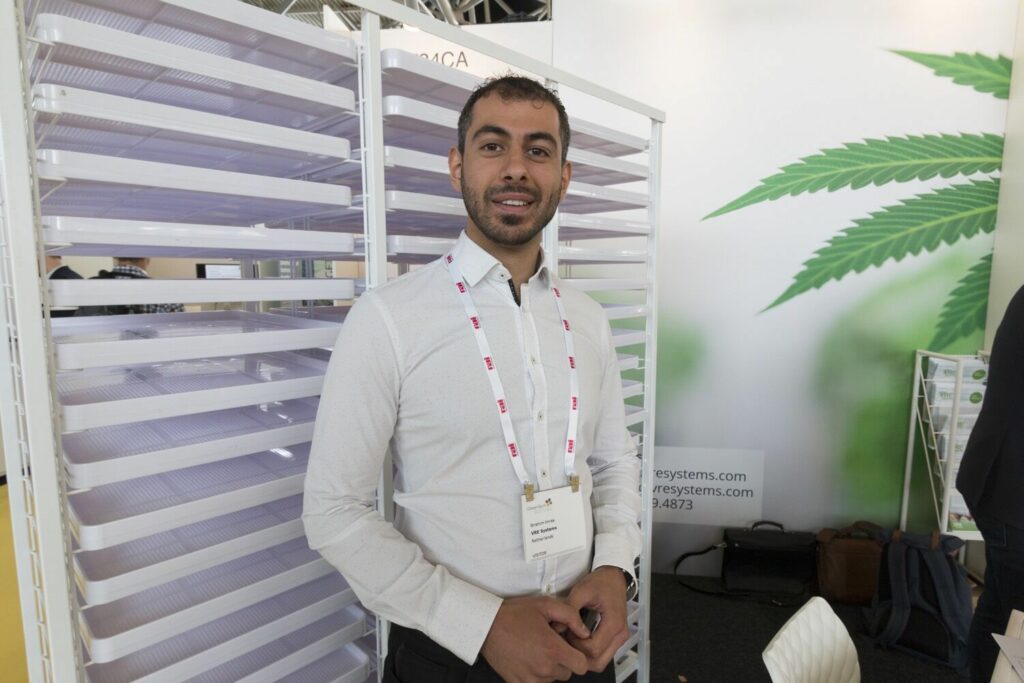 Expectations for the European market are high. Canadian supplier VRE Systems opened a branch in the Dutch town of Almelo to service the European market. The company offers complete solutions for the cultivation of medicinal cannabis. “The demand for medicinal use is growing rapidly”, according to salesman Ibrahim Imrak (picture above). “There’s a lot going on at the moment and we want to stay ahead of the developments.”

A proposal regarding a pilot with legal cannabis will be discussed by the Dutch Senate on the 25th of June. It is expected that a decision will be made after the summer recess. “Despite reports to the contrary, a large enough number of municipalities have registered for the pilot”, said Thomas Rau, spokesman for the Legal Cannabis Coalition. 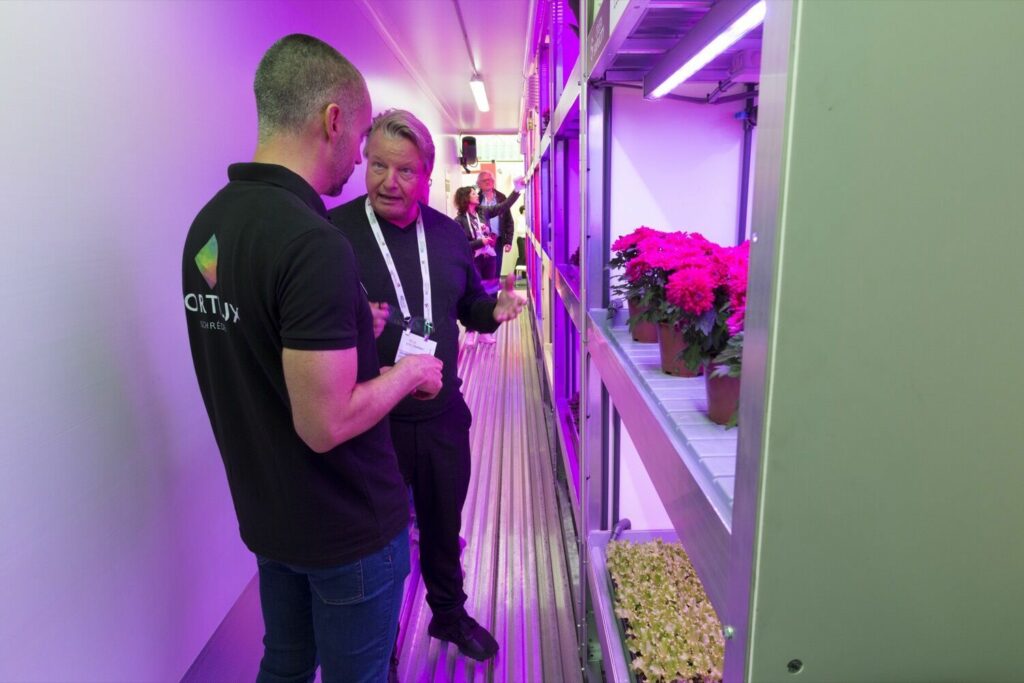 Another noticeable trend at the fair was vertical farming. Hortilux and Green Simplicity were at the fair together, showing a large climate chamber for studying light recipes. It is possible to use a different light recipe in each compartment.

Marc van der Knaap, technical manager at light manufacturer Lionz Light, has noticed that growers are often very focused on the number of µmol/joule. He thinks that choosing a light should be about more than just the efficiency. 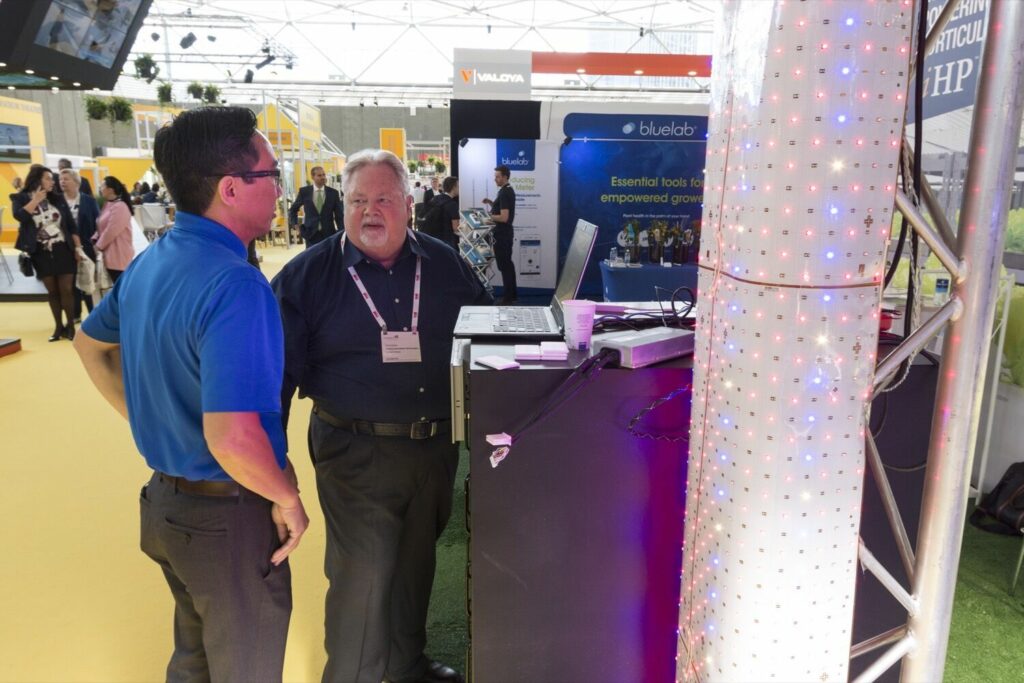 LED lights, not in a bar, but on a large sheet (picture above). Andy Nguyen, director of Artesyn (left), explained that this would suit multilayer cultivation and illumination from the sides. 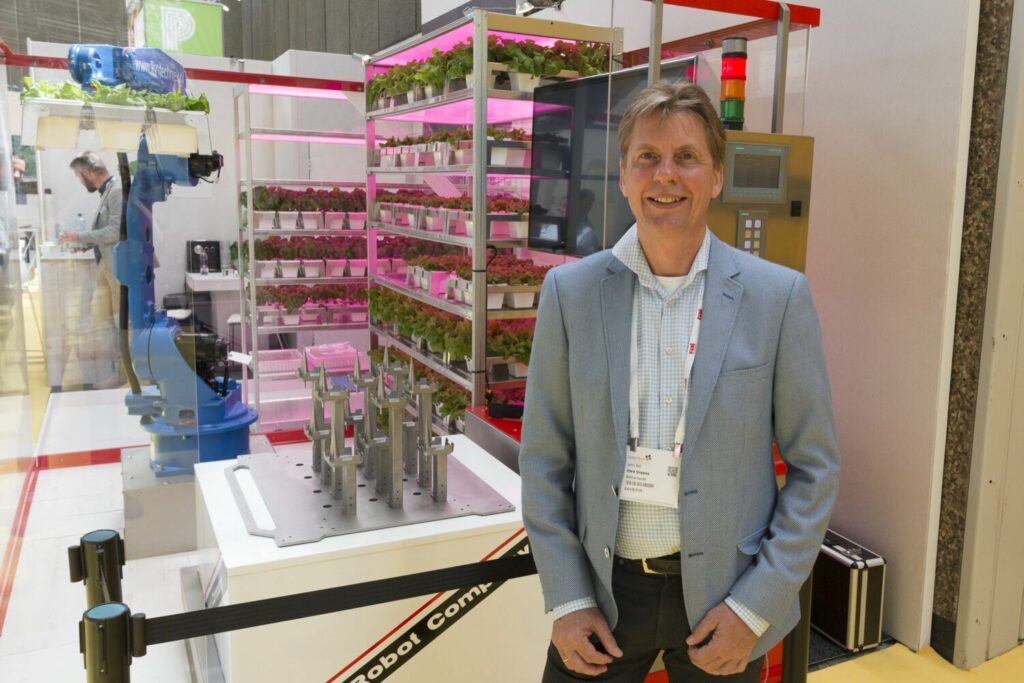 John Bijl, owner of Vitro Plus, has been growing his ferns using a multilayer system for several years. He sees opportunities with multilayer cultivation for supermarkets. It would allow them to cultivate their own vegetables at distribution centres. He developed a system with robots that water the plants and move them apart. 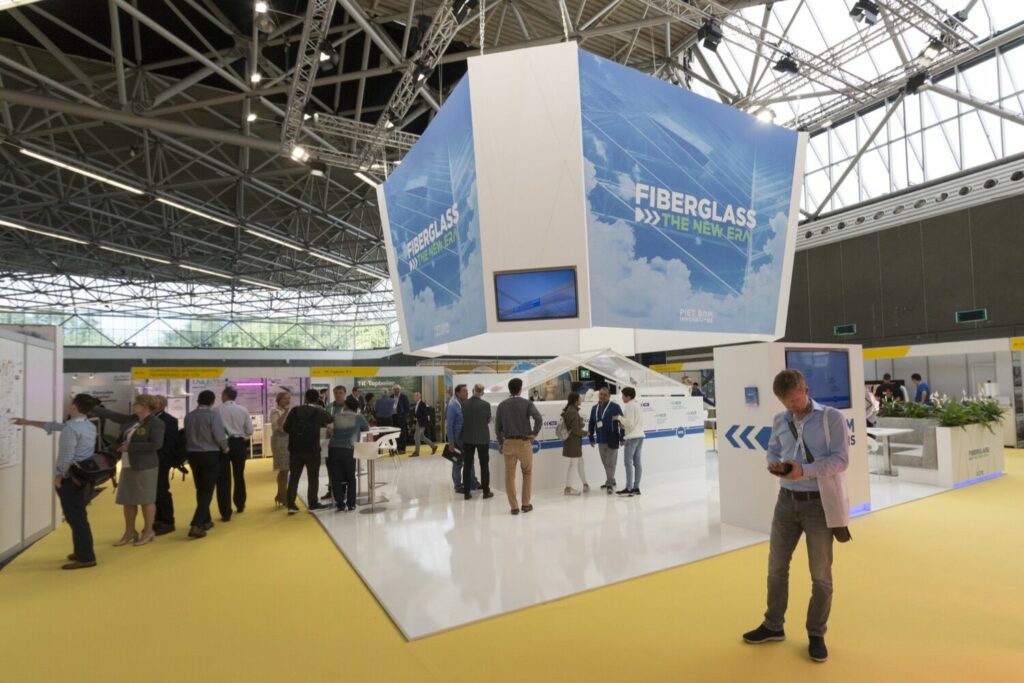 Piet Bom Innovations stood out with a large booth. Piet Bom is the founder of Bom Kassenbouw. After selling his greenhouse company twenty years ago, he’s been working on innovations. He was showing his fibreglass roof, designed to replace the current aluminium roofs. The innovation was nominated for a GreenTech Award but didn’t win. “Steve Jobs inspired us to think big”, said Bom (picture below). “Everyone knows we’re here now.”

Floribusiness Editor - 23 juni 2022 0
FM Group and Hilverda De Boer are merging. Both trading companies operate worldwide. With a strategic merger they want to continue to be an...